On Saturday a friend asked me to substitute for her Sunday school class the following day. It was very last-minute, which was good because it minimized the time I had to stress about it.

See, the last time I taught a lesson in church was for the Sunbeam class (3-4 years old) about ten years ago.

I’m not a good teacher.

Despite preparation I was overwhelmingly nervous. And a little panicked. I apologized at the beginning of class, saying I’d never really taught before and didn’t know much about teaching. Without meaning to I rushed through the lesson. I was so afraid that the class members would think I was an idiot. Did I mention it was the 16-year-old girls? They were so sweet and kind.

I wasn’t sweet or kind. I was just flustered.

Friday was a stressful day for me.

Baby jr woke up around 6am again, which, as I’ve said before, is way too early. Thankfully, she was ready to go back to sleep by 6:30 – and the Romgi played with her in the interim. When jr woke up again at 8, the Romgi had already left to go fishing, so I mentally prepared myself for a few hours with the kids and then an evening at the symphony with the Romgi.

By 10 the kids were both going berserk. jr obviously needed a nap but wouldn’t go to sleep. The Bwun was hitting, throwing, and kicking despite numerous time outs and severe talking-tos. (I’m debating whether there ought to be an apostrophe there just for visual clarity – talking to’s? What do you think? I generally avoid apostrophes, since the rest of the world uses too many. But I’m unsure here.) I had left a message for the Romgi right after I woke up that he should bring home some donuts, but I eventually I gave up on getting them for breakfast. There was a lot of crying and screaming in our house, and I was worn out.

At noon I decided the Romgi had been out long enough. My patience with the kids was gone, and I was frustrated that the Romgi got a day off work while I was still doing my full-time job. (Speaking of which, I’m a little disappointed that there’s no overtime pay for motherhood, since it’s already around-the-clock. Then again, I’m not getting any money for this anyway…) I left another message for the Romgi – a very abrupt message – telling him that he needed to come home soon. I do want the Romgi to have fun fishing or whatever he wants to do with his time off, but not at the expense of my sanity. It seems only fair that I get a break, too.

Another hour passed without hearing back from the Romgi. I called him again; this time, his phone went straight to voicemail. And I started to get a little concerned. The most likely explanation was that his phone had died, but I realized he’d been gone for at least 5 hours – maybe more, depending on what time he left – and that was a lot longer than he normally spent fishing.

By 2 I was beginning to seriously consider that something might be wrong. I thought about calling the local emergency rooms to see if the Romgi had been admitted, but I talked myself out of it because it seemed improbable. After another hour, though, I called my mom and the Romgi’s dad to ask what to do. I knew it was much too soon for the Romgi to be considered a missing person. But he’d been gone for 7+ hours by that point, and I didn’t feel like it was typical of the Romgi to spend the whole day fishing (especially considering that I was spending the whole day at home with the kids).

For the next hour I thought about how to handle the situation if the Romgi was missing, injured, or dead. Some part of me must have realized how unlikely that was, because one concern that came up was fixing the paint stain on our bedroom carpet. I made up my mind to cancel our symphony plans if he hadn’t come home by 5, and to call a friend or relative to come over for support if he was still gone at 6.

Just after 4, our car pulled into the driveway. I admit, I ran out crying. The Romgi was rather taken aback.

He explained that he didn’t have reception on his phone, and it must have died sometime during the day – when he noticed it was off, he came home, but he had no idea what time it was.

That’s right, he was having such a great time fishing that 9 hours flew by.

The Romgi did bring one of these home with him: 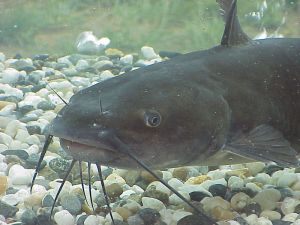 After much apologizing, and “How can I make it up to you”-ing, the Romgi went out to gut the fish. Yep, he had brought it back still alive and stored it in a bucket of water while he tried to calm me down. And honestly, watching that fish die was nearly as bad as spending hours worrying about the Romgi being missing.

We didn’t end up going to the symphony – by the time I felt less emotionally frazzled, I would’ve had to rush to get ready, and the fear of being late makes me really, really stressed. So we canceled our plans and had a quiet evening in.

Next up: catfish fillets!

I know I’ve posted this print before, but I just saw today that there’s still at least one copy left for sale after I thought they were all gone:

I definitely plan to scrape together my extra money and buy this before it’s gone! (In other words, please don’t beat me to it – unless you’re giving it to me as a gift! …Maybe you should tell me, if that’s your plan.) I’m sure I can find a space for it in our living room.