Tuesday, October 26 started out like pretty much any other Tuesday. On Tuesdays and Thursdays I go to donate plasma to get a little bit of extra cash.   Because of Monday night’s adventure, I was pretty tired when I woke up Tuesday morning this week.  I went anyways, and the actual donation was pretty uneventful.

I got home around 10:30 in the morning, and Roni was complaining that she was having contractions.  Now, you have to realize that she’s been having fairly consistent contractions for a while, so we weren’t too concerned.  However, around 11:00, she started getting REALLY strong contractions that she said were definitely different from the normal contractions.

She called her doctor, to see if she could come in for a quick check, but unfortunately, Tuesdays are the day of the week that the doctors in that office schedule all of the surgeries they need to perform.  When she told the nurse on the phone what was going on, the nurse said, “Go to the hospital, don’t stop anywhere, don’t do anything else.” 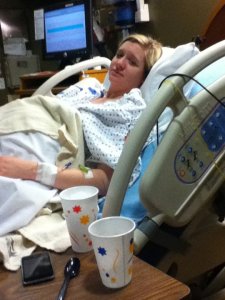 So we started trying to call people to watch Evan while we went to the hospital to get checked.  Parents? Busy at work. Sibling?  Had sick kids.  Cousin?  Out of town. Who to call?  Roni finally had the idea of calling our home teacher’s wife and she graciously agreed to watch over the Bwun.  We packed up a couple of diapers for the Bwun, and headed out.  By the time we got the Bwun dropped off, it was close to 1:15.

After a quick stop for gas, we went straight to the hospital and checked in by 1:47.  At this point, though we had not verbally expressed the viewpoint, we had both assumed that they would watch over Roni for about 4 hours, and then put her on bed rest for the rest of the pregnancy.

The nurses were great, probably because it was very apparent how much pain Roni was in.  They took us to a delivery room and set up all of the monitors.  About 2:30 a different nurse comes in and says to Roni, “Well, you’re in labor.” Wait, what?  Roni thought she was kidding.  I mean, a whole month early?  We didn’t even have a car seat!

What she said next was even more surprising.  “Let’s get that epidural started, because I have a feeling this is going to go quick.”  So they set up Roni with an IV, and called the anesthesiologist, and got to work.  They gave Roni a shot of antibiotics around 3:00 (yes, that is actually important even though it doesn’t seem to be.  Just like Dobby).

What came next?  About 3 hours of waiting.  Remember that bit about the antibiotic earlier?  Well, it turns out that they have to let the antibiotic run its course for 4 hours, or else the baby has to be submitted to all sorts of additional tests.  During this whole time, Roni was so close to being done that the nurses didn’t even want to check her, for fear that they would accidentally break her water.  However, Roni did ask the nurse at one point, “So, when you say I’m in labor, does that mean I’m having this baby TODAY?” to which the nurse replied, “You’ve got an epidural in, where do you think you’re going??”

Around 6:15 the doctor came in.  He had been doing surgeries and deliveries since about 9:00 the previous night.  Fortunately, he was really great.  He checked Roni, and confirmed that she was ready to push as soon as the water broke, but we had to wait for that magic 4 hours for the antibiotic to fully cycle.

As the nurse did the final setup for the delivery, she told us all the horrible things that can happen when your baby is born at 36 weeks.  Her lungs probably weren’t developed.  She might be in the hospital for weeks.  If her lungs weren’t working well, they will have to life-flight her to another hospital while you have to stay in this hospital.  Scary stuff, right?  Not really what you want to hear (but what you probably NEED to hear) right before your wife gives birth.  They also gave Roni the second dose of antibiotic.

Right at 7, the nurses went and got the doctor again.  He got his gloves on and the rest of the staff started setting up towels everywhere.  At 7:15 the doctor broke Roni’s water.  Three contractions and about 10 pushes later, we had a beautiful baby girl at 7:23.

At first, I was terrified.  She looked blue and she looked bruised from having to sit there for 4 hours.  I was horrified that something had gone wrong, especially after what the nurse had been telling us.  She wasn’t crying, and I was sure that something was dreadfully wrong.  She was just so quiet.  Too quiet.  I wondered why she wasn’t screaming and crying.  The only thing keeping me calm was that nobody ELSE was panicking.  After a couple of minutes they said she looked healthy.  After a few minutes more, her color had changed to a bright baby pink.

Because she was early, she was covered with this thick waxy slime that was just about impossible to get off.  They finally cleaned her off a bit, and handed her off to Roni.  The nurse let us know that she appeared to be breathing just fine for now.  When the nursery workers took her, they said she was doing well, and didn’t seem to think she would need to be transferred.  She was a healthy size and weight; jr. weighed 6lbs 6oz, and was 19.5″ long.

24 hours later, and she is still doing great.  We are just in love with her, and are grateful that everything has been going so well.  Family has graciously provided clothes and a car seat for us.  Everything happened so fast and early that we’re still trying to catch up.  For the most part, however, we’re enjoying the ride. 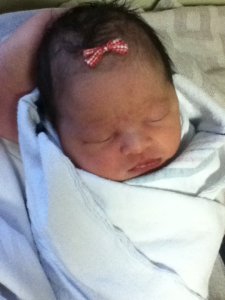