…and not one I ever wanted: the Bwun’s first ER trip.

I’m sure part of the reason we went was because this is our first kid, and first major (or seemingly major) illness. But my poor little guy! He was not doing well.

Yesterday afternoon I noticed that the Bwun was feeling a little warm. I mentioned it to the Romgi when he got home from class, and we tried taking his temperature (seriously, have you ever tried to get a toddler to hold still even for an underarm reading?), but it wasn’t high at all. He definitely felt warm, though, so we decided to give him some Tylenol just to be safe. (Hopefully that isn’t actually unsafe…) By the time the Romgi got the bottle of medicine, the Bwun was lying in my arms and almost asleep – at only 4:30.

Very odd: the Bwun, as a rule, does not take naps anymore. (Yes, you can send your condolences.) And he does NOT fall asleep unless he’s in his bed or his carseat. So we figured he must really be exhausted; a new tooth showed up a few days ago, and I thought maybe another was working its way through. I put the Bwun in his bed and went on with my afternoon.

The Bwun didn’t sleep much more than an hour, and he seemed fine when he woke up. Since he’d had a nap so late in the day I expected him to be riled up or at least his usual self until an hour or so past bedtime. (He usually goes to bed at 8:30.) Another strange thing…by just past 8 he looked and acted like he was tired again. He sat with me for a while, almost falling asleep, and I put him to bed for the night before 8:30. My little Bwun went right to sleep.

Several Perry Mason episodes may have been watched over the next few hours.

Around 11 I was getting ready for bed and heard the Bwun call out, “Mama!” I’m glad I went in right away instead of seeing if he’d go back to sleep, because when I picked him up he felt like he was on fire. He was whimpering and moaning and was obviously miserable. I hated to do it, but I made him hold still to get his temperature – 102.1°. We offered him water and more Tylenol, both of which he refused; then he threw up.

The Romgi and I had been talking about what to do, and after the Bwun threw up we were convinced that we should take him to the doctor. The Romgi gave him a blessing and we headed out at 11:30.

Can you imagine going to a strange place, having people poke and prod at you without understanding why, and not being able to explain what hurts or how you feel? My poor little Bwun had his temperature and blood pressure checked several times; they gave him more Tylenol; a doctor looked in his ears and throat; and finally, they did a chest x-ray. The doctor told me to wait in the ER while the Romgi took the Bwun for the x-ray and he was absolutely right to do so – after hearing what they did to the Bwun, I don’t think I could have handled being there. The Romgi described it as a high chair that clamped around the Bwun’s waist (after he was undressed, of course), with the Bwun’s arms pinned up and the x-ray screen pushed against his front.

Fortunately, by the time the x-ray was done, the Tylenol was starting to bring the Bwun’s fever down and he seemed to be feeling a little better. The final diagnosis was “He has a fever; it may be the beginnings of strep or the like, or it may be something viral.” We got a prescription for Amoxicillin in case the Bwun does seem to be developing strep throat, and that was that.

The Bwun fell asleep on the way home.

It was 2am when we got back to our house; the Romgi and I were exhausted. I was sure that the Bwun would sleep late into the morning. Wrong! At 7:30 he woke up and was his regular perky self.

Welcome back, the Bwun! I’m glad nothing more serious took you on your first ER trip. 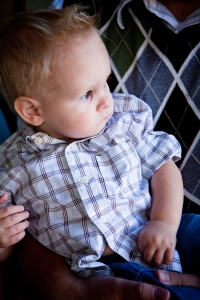 P.S. The Romgi pointed out that now everyone in our family except him has been to the ER this year – me (ear infection), jr (wanting out), and the Bwun (fever). The Romgi…this is a good time to feel left out!