We’ve survived another day without the Bwun accidentally (or intentionally) squashing jr. In fact, he still thinks she’s the greatest thing – aside from having his picture taken. He seems to have figured out that if he lies down next to her, I’ll get out the camera. Clever guy!

The Bwun asked to "hoe-wee" (hold it). He did pretty well...with help. 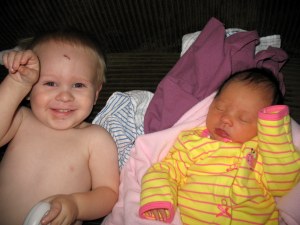 For whatever reason, the Bwun wanted his clothes off. He stopped throwing tantrums after I calmed him down and got his clothes off, so it seems like it was worth it to humor him. Once he was down to his diaper he wanted to take pictures with jr. Okay...?

It’s worth noting that the Bwun has also figured out you’re supposed to smile when someone takes your picture. He makes this ridiculously cheesy grin…usually it turns out being cute, but sometimes it looks more like a sneer.

Here are a few final shots of our cute little girl: 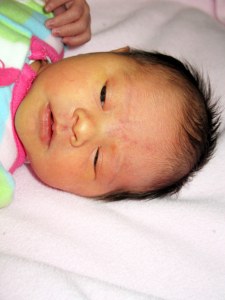 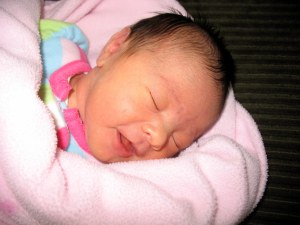 The Bwun absolutely adores jr (well, we all do). He heard me call him from the other room after I got up from my nap today, and instead of his usual “Mama!” he rushed in saying, “Beebee?” His favorite thing to do with her is be “soft.” We’ve spent a while teaching the Bwun that hitting is bad, and being soft is good – when the Romgi was in Korea, the Bwun started being aggressive for a little bit. So whenever he got a time out for hitting, he’d have to show me that he could be soft. What was initially him petting my face turned into him making a fist and stroking my face with it.

Which means that now, to be “soft,” the Bwun walks up to jr with fist outstretched and aims for her cheek. Don’t worry, he is actually very gentle. It just is always a little worrisome to see that fist coming at her face.

This really is the Bwun being soft. (Notice the sad cut on his forehead? I hope it heals soon and doesn't leave a scar!)

Before jr was born, the Bwun didn’t seem to understand that there was a difference between the words “June” and “juice.” Whenever I talked to him about the baby he’d ask for a drink. It was pretty hilarious. Gradually, he figured out that June was something else (I’m almost positive he thought June was another word for “tummy,” though) and started saying “Joo.” Now he loves to play with “beebee Joo.”

Staying with the Romgi’s parents makes it much, much easier to adjust to having two kids. They’re so good to keep the Bwun entertained. I got a nap this morning, bringing my total sleep to about 9 hours. Amazing! It helped that jr slept in her bassinet all night (except when she ate). It took the Bwun almost two months to start sleeping without being held. This time, I figured that if jr could sleep in the hospital bassinet, she could sleep in our bassinet too. None of this coddling business!

And finally, can I openly admit that I LOVE PINK?

The Mikas both love pink.

The Romgi wrote a very thorough description of our adventure here.