Ok, finally. I know this is mostly all old news but for anyone not paying attention, we’ve had a lot of big events this year!

First, YES WE GRADUATED. I walked with Jarom at the law school convocation, which was smaller and more interesting (in theory) than the one for my college would have been. My parents and Jarom’s sister, brother-in-law and their kids all came out from California, which definitely marked it as a Big Occasion.

Posing for pictures is not my strong suit.

Afterwards, we had a big party at our house. Tons of people helped out, so aside from the frantic housecleaning and preparation beforehand, I was able to just chat and enjoy myself during the party. If you ever want to throw a casual but delicious outdoor buffet dinner, here’s what we had: chili and cornbread, pulled pork sandwiches, fruit tray, meat/crackers/cheese tray, veggie tray, chips and salsa, and an ice cream bar for dessert. Most of the planning was done by Krista, and she even served the ice cream! Super thanks.

Jarom had been doing a one-year internship with Provo City’s legal department, and a new student was scheduled to replace him at the end of April. He’d been applying to jobs for months, looking for something permanent for after graduation. On April 25, he was contacted out of the blue by a Salt Lake firm he interviewed with last year. Apparently they really did keep his information on file, and asked if he was available for and interested in an interview now. We were at Jarom’s parents’ house (enjoying Indian food) when he got the email, so he wrote back and said YES, let’s schedule an interview. Encouraged by the sudden contact, Jarom applied to a half dozen other jobs when we got home.

The next day Jarom realized that he left his phone at his parents’ house, so he drove up to get it in case a lucky call came. By the time he got there, he had two messages from other firms asking him to come interview! One was in Mesquite, Nevada (no offense Nevada, but I have no interest AT ALL in living there), so he did a phone interview. The other was a company in Orem looking for in-house counsel. He set up an interview the following day (April 27).

That interview went so well that he was asked to come back on Monday to interview with the company’s president! They offered him a job starting Wednesday, May 2, so he ended up with no gaps between the Provo position ending and a new job beginning. The company loves him (of course), and Jarom is enjoying his work, even though he’s insanely busy.

So! Graduation and a new job! AND our 5th anniversary!

I’ve been home with the kids full-time, which is amazing. I spent all of May basking in the no-homework-no-tests-no-reading-for-class bliss, playing outside and taking the kids to parks and play areas.

Also, here are pictures of the kids. 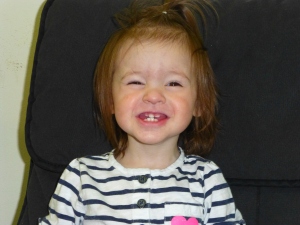 And she can smile.

She had a friend come over. June is a month OLDER than this other girl but…well…quite a bit smaller! We got the giant bear as a reward for Evan, who was having trouble remembering not to put things in June’s crib at bedtime. When he reached a certain number of days without incident, we got the bear, which is fortunately too big for him to pick up and put in her crib.

Siblings on the couch.

A rare moment of both kids looking at the camera, without any fingers in nostrils. 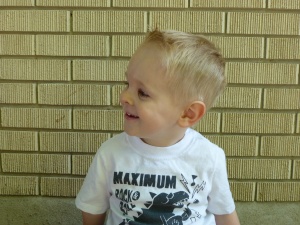 I finally took Evan to get a haircut at a barbershop. There’s only so much I can do with clippers at home. He was really shy and nervous, and sat silently in the chair the whole time, but came out with a much neater looking cut!

Outside in the morning. Nice pajamas, June. Same ones Evan wore in this video from last year! 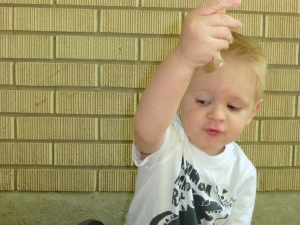 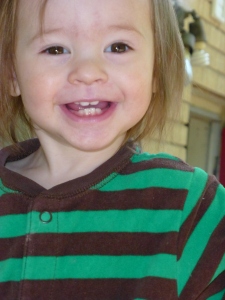 Here’s something fun: I have a picture of the kids from January 2011 and a similar one from a few days ago. First… 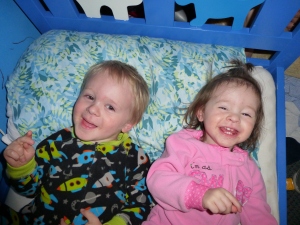 Other news: yeah, the house, that’s pretty exciting. It’s in Springville – built in 1901! See it on the map here, and try street view (rotate left to see the corner house with the big tree).

What do you think, has our year been momentous enough so far?