Ready for the long-awaited pictures? 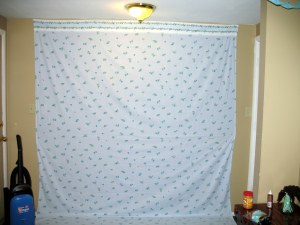 The night before, I set up this thrift store sheet as a photo backdrop so we could all have our picture taken. With our mustaches.

I had a little vase filled with mustaches for guests to use. The mustaches were made from dark brown felt, cardstock, and something from the craft store called "cookie sticks." 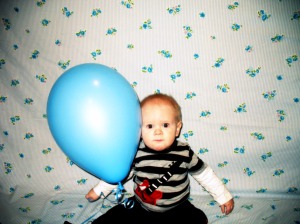 We got lots of balloons to match the thrift store sheet. And blue for boys, right? The Bwun is not unhappy - it's just difficult to get any pictures of him sitting still, and this was the only one in focus where you could see his face instead of just the balloon.

I made the Romgi model a mustache for me before our guests arrived.

Originally I planned to serve cupcakes, but February cupcaked me out. So we had cookies (Oreos, chocolate chip, and Mother's) and milk instead. I put the cookies on a cake plate; it was awesome. 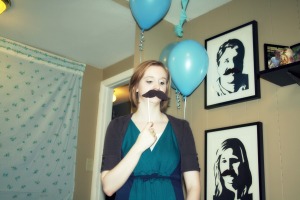 Look in the background - the Romgi put mustaches on our portraits! 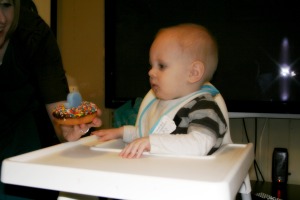 Remember that Williams-Sonoma giant donut cake pan I love? I made a miniature one for the Bwun! ...Ok, fine, we got a donut from the BYU Creamery. It seemed fitting. The candle is a blue elephant.

The Bwun has obviously watched me eat donuts a time or two. 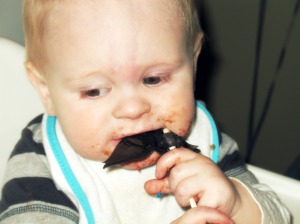 Eating the mustache was completely his idea, though. 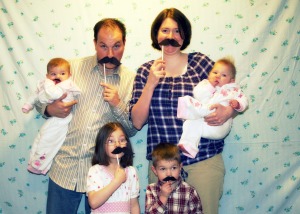 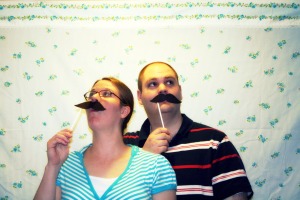 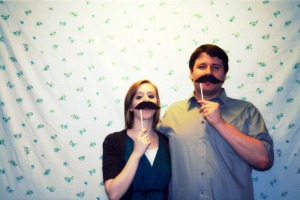 We watched Up, ate cookies, drank milk, and tried to get the Bwun to open presents. I guess he just isn’t old enough to care yet. But he definitely liked the toys once they were opened! It was a lot of fun, not too much work, and a great way to take advantage of the mustache fad. (By the way – did I tell you the whole thing was the Romgi’s idea?)

If you’re curious, I used this mustache template from The Inspired Bride. I suggest making the mustaches slightly smaller. I cut some at half-size for the kids, and 1/4-size for the twins.