Thank you for the dinosaucer shirt.

As you can see, it looks great on me.

A short while ago, Roni found a recipe for a cake that looked tremendously delicious.  We knew we had to try it.  It was for a chocolate pumpkin cake (original recipe here).  We both love pumpkin chocolate chip cookies, and this recipe sounded like the natural extension of that love.

For those of you who don’t know, the problem is that we have neither a real oven, nor do we have a real stove.  We do have, however, a toaster oven and a portable butane stove to bake and cook with.  Despite our significant handicap, we decided to give the recipe a go.  We were not disappointed.

So, other than carrot cake, I had never made a cake without using a boxed cake mix as a base.  I was a little bit nervous that the cake would come out all wrong when we tried to make it.  But, we made the batter and it was actually quite good.  The pumpkin purée went into the batter, but it wasn’t as overwhelmingly PUMPKIN as I expected.

We baked the first layer, and popped in some Perry Mason to pass the time while the first layer cooled.  We leveled the layer and we were both surprised at how moist and chocolaty the cake was.  A definite winner!  Sadly, by the time the second layer was done, the Bwun was in bed, so we couldn’t really fire up the mixer to get started on making the frosting.

However, as soon as the Bwun woke up the next morning, I started on the frosting.  The frosting had a bit of cocoa powder in it; this made it  wonderful and rich.  The only thing I would change would be to leave out the cinnamon that the recipe calls for (It almost feels like it detracts from the rest of the cake).  We put the frosting on the cake, and let the it sit in the fridge for a good long while.

The final step is what really brought this cake into perfection; we started making the ganache topping.  It was very simple, and very tasty.    Just a little cream, chocolate and butter, and it was ready to go!

We waited for a few minutes for the ganache to cool, and then poured it over the top of the cake and let it run down the sides.  Here was the end result. 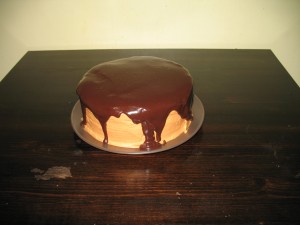 Not the prettiest looking thing we’ve ever made, but wasn’t bad for having been made in a glorified toaster!  The pumpkin made the chocolate cake moist and delicious, and the combination of the sweet cream cheese/whipped cream frosting and the rich ganache made for the perfect topping.  If you’re in the mood for some seasonal fun, this cake is a must try!  I think it was certainly good enough to make it into our cookbook.