And by the way

The Bwun cracks me up.

A few notes: This post talks about breastfeeding, so if you’re not down with that, just come back later. Or scroll down to a different post or something. Also, I already owned two sets of LilyPadz but I did receive a new set from the company to review. I received no other compensation and the opinions here are entirely my own.

I think the story goes something like this…when I was pregnant with the Bwun, my mom ordered a lot of really, really awesome space-themed stuff to go in the Bwun’s space-themed nursery. And in a catalog that shipped with one of the items she saw an ad for LilyPadz, which are a type of nursing pad. She thought they sounded useful, and I agreed, so she bought a pair for me (thanks, Mom!). Since that was several months before having the Bwun, the box of LilyPadz got put in some drawer somewhere and more or less forgotten about.

Then, guess what? I finally had the baby. And a few days later, I also had more milk than I (or the Bwun) knew what to do with. It would have been fine if I had just been staying at home – but I had a situation to deal with at the DMV, which meant getting into real clothes (what! No sweats and oversized t-shirts?). It was the same day my milk had come in, and I did NOT want to wear a bra. I didn’t own any nursing bras yet and none of the ones I had were going to work. So I dug around until I found the LilyPadz. Now would you like to know what they are? Ok. Great. I will tell you. 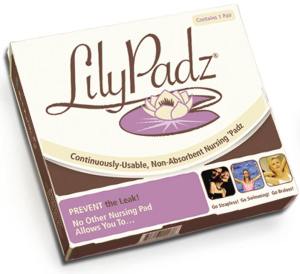 My description: LilyPadz are thin silicone nursing pads that prevent leakage instead of just absorbing it. That means you don’t have to worry about disposable or cotton pads that are obvious, that move around, or that can only absorb so much liquid. Take a look:

One side is stcky, so it adheres directly to your skin. It doesn’t leave any residue and the stickiness is refreshed each time you wash the pads. A single pair can last up to 2 months. As the box says, LilyPadz allow you to go strapless, go swimming, or go braless (which is exactly what I did when I went to the DMV).

From the website: LilyPadz are the revolutionary alternative to traditional nursing pads combining such unique features as flexibility, breathability, invisibility and “sticks-to-you-ability” to provide the kind of protection every expectant and nursing mother needs.
Whether or not you breastfeed your baby, inconvenient, leaky and let’s admit it, “obvious” nursing pads are the last thing you want to worry about during and after your pregnancy. The special soft, flexible and non-absorbent material in LilyPadz conform to your breast for a secure fit, allowing you to wear whatever you like with confidence.

Yesterday the Romgi and I had a law school dinner to go to, which meant leaving the Bwun with the Romgi’s parents for the evening. It was a perfect opportunity to test out LilyPadz again, now that I’d be away from the Bwun for long enough that I actually might need the pads.

It took all of 2 minutes to get the LilyPadz out of their package and put on. I love that I don’t notice when I’m wearing them, and I don’t have to worry about them sliding around or filling to capacity. We were away from the Bwun for about 4.5 hours, and right now he’s eating every hour and a half to two hours. And guess what? I was absolutely fine. Although I worried that it would be too many feedings to miss, the LilyPadz did their job perfectly.

LilyPadz can be washed with warm soapy water, but you can also use LilyWash, a foaming cleanser specifically designed for LilyPadz. I tried LilyWash once I got home. Compared to plain soap and water, it seemed to be much more effective at restoring the stickiness of the pads.

You can order LilyPadz through the website for $24.95 plus shipping. While I admit that the price seems a little steep, it is a bargain compared to disposable nursing pads (especially considering the convenience). I did try washable cotton pads, and I got a rash every time. I really, really love LilyPadz. I was warned that with breastfeeding I’d have to change clothes in the middle of the night because of leakage, but LilyPadz do an excellent job of preventing that. (And the Bwun sleeps through the night, anyway!)

Seriously – I think LilyPadz are a brilliant idea, and if you don’t need them, consider getting a pair as a baby shower gift. I highly recommend them to nursing mothers.

In Praise of the Bwun

(Surely you’ve been warned by the title.)

Yesterday was the Bwun’s 6 month checkup. I have to say, he did amazingly well. Let me tell you all about him.

Alright, so maybe those numbers aren’t really convincing. He does seem a bit on the small side. Maybe developmental milestones would be better. (Here I go way overboard on the mom thing – the doctor said the Bwun has met a lot of the milestones for 9 months and, if he were examining the Bwun without knowing his birthdate {and ignoring how small he is} he’d guess the Bwun is about 8 months old. Way to be ahead of the curve!)

Best Bwun ever? I vote yes.