The Silent Gondoliers explains why the gondoliers of Venice, who were once renowned for their beautiful voices, no longer sing for their passengers. It’s because of Luigi: a masterful gondolier but a horrendous singer, who must give up his gondola, his fiancé, and his dream because of his voice, which causes severe pain in everyone within earshot. Goldman (or, should I say, Morgenstern) does a wonderful job of lightheartedly conveying the tragedy of Luigi’s situation, and of his later triumph – a deed for which the other gondoliers voluntarily sing as horrendously as Luigi does.

There are some books that I read and can hardly focus on the story because the writing is so mediocre (or miserable). Others I sail through joyfully because the writing is so exquisite. Still others I sail through and don’t notice the writing much at all, because it’s decent quality and does what it’s supposed to: tell the story. The Silent Gondoliers falls into this third category. I didn’t celebrate the writing, but I enjoyed the story. I longed to travel to Venice and ride on a gondola. I felt the bitter pangs of Luigi’s suffering. I laughed when Goldman (Morgenstern) wanted me to. Basically, I had fun.

Tweet: Read another of S. Morgenstern’s fables in the enjoyable (albeit short) The Silent Gondoliers. Then buy a ticket to Venice. 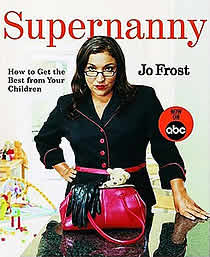 I know the Bwun is still super little. But, while I have tons of ideas about what types of parenting I do NOT want to use, I haven’t really formulated much in the way of positive parenting techniques. I picked up Supernanny in part to give me some direction and in part because it was on a bestseller list for 2005 – I needed a few more 2005 books for the Countdown Challenge!

For those of you who don’t know, Jo Frost is a nanny who has written several books on childcare. I appreciated her disclaimer in the introduction to Supernanny that no, she doesn’t have kids – but she’s around them all the time and a lot of her techniques come from her own experience and from watching kids with their parents and seeing what works. She has a list of 10 rules, and in each of the sections of the book – eating, dressing, discipline, potty training, and so on – she discusses how the rules apply to the specific task at hand.

My two favorite rules (I’m going to paraphrase them here) are consistency and responsibility. Jo says that kids need to feel like they can count on things being the same way – whether it’s always being disciplined for hitting (rather than sometimes letting it slide) or always reading a book together before bed. Of course, you have to be flexible, and she’s very clear that routine is important. Not a fixed schedule. Honestly, I had already seen a difference in the Bwun when we started doing a routine together, especially at bedtime. The other aspect of consistency is to be unified as a couple in your approach to parenting. Kids shouldn’t learn to expect a strict “no snacks” rule from Mom and “eat whatever you want, whenever” from Dad, for example.

As for responsibility, Jo talks about the fact that we’re adults, and we have to behave as such. It does no good to yell or throw a fit when we’re frustrated with our kids. That shows them it’s ok to lose your temper. I’ve thought a lot about this over the past few months, because there were times when the Bwun was smaller that I just wanted to scream. I imagine it only gets worse as he grows up and starts misbehaving on purpose (isn’t that what boys do?). But it’s important to keep in mind that, after all, these are children, and they don’t have the self-control or mental capacity that we do. I learned this on my trip to New Mexico: kids have small bladders and short memories. They’re going to use the bathroom all the time and forget what you just said. Jo points out that much of parenting is repetition, not only of tasks but words. You have to remind kids of everything, including the things you just reminded them of. Fun!

I don’t think I’ll be keeping a copy of this book to live by, but I really enjoyed Jo’s perspectives and her approach to raising children. I liked how flexible she is, and how easy she makes parenting sound. Ok, not easy, but definitely doable. And I picked up some good ideas about being a positive parent.

Tweet: Find some interesting parenting techniques from Jo Frost’s book Supernanny, and see how they work in your life.

The Tales of Beedle the Bard

I know, I know – this came out forevermany years ago and I just now got around to reading it?

The Tales of Beedle the Bard, in case you seriously live under a rock (I have major deja vu right now, have I already written a post like this?), is a collection of stories that every witch and wizard child grows up hearing. Dumbledore left a copy of Beedle’s original stories to Hermione. She translated them. Yep.

Ok, but in real life – which is actually different from Harry Potter – J.K. Rowling created several very special editions of this collection, each handcrafted and handwritten, to be auctioned off for charity. Only later did she decide to release the stories to Joe on the street. As I remember, The Tales of Beedle the Bard was the Christmas gift last year. Maybe the year before. My memory isn’t that great. But it was big.

So why did I not read it then? I like Harry Potter; why not get a copy for Christmas, or at least put my name on the waiting list at the library?*

I think to some extent I felt that the Harry Potter series was more than complete enough, and Beedle’s tales would be extra information to such an extent that they wouldn’t be interesting. They wouldn’t add to the story but rather distract from it (not detract; I do know a few words, and I just chose them well).

As it turns out, I still feel that way. A little bit. I read the stories to the Romgi while we were driving somewhere. Dumbledore’s commentary may have been longer than the tales themselves. My best insight is that I’m much more interested in the characters of Harry Potter than in their academic writings, regardless of what Rowling might be trying to convey about the characters through their writings. Does that make sense?

But I confess – if I had one of the original handcrafted copies of The Tales of Beedle the Bard, it would be one of my absolute favorite books.

Tweet: check out Tales of Beedle the Bard for fun stories, Dumbledore’s commentary, and a peek at Rowling’s art – if you feel like it. Or don’t.

* I got great presents for Christmas, ones I like a lot better than this book, and at the time I had some substantial fines at the local library. Yipes.