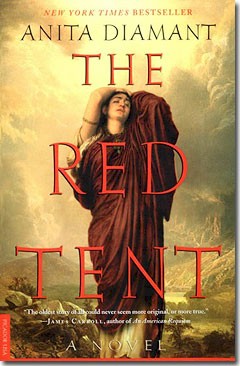 I feel the need to preface my remarks by saying that I am extraordinarily easily influenced by others’ opinions when it comes to books and movies, which is why, ironically, I avoid reading reviews beforehand. My cousin let me borrow this book, saying merely that it “was well written” and that she “had strong feelings about it.” Of course, I interpreted that as a negative commentary. Being aware of my tendencies,  I tried to counteract the pull to think of the book in negative terms.

Alright. Shall we begin with a summary?

The Red Tent is, according to the author, an attempt at Midrash, or filling in the gaps in Biblical narrative to aid in the understanding of the story. Diamant’s work is told from the point of view of Dinah, Jacob’s daughter who is mentioned only briefly in Genesis 34, where she is defiled by the prince of Shechem and her brothers take revenge on the city. This becomes the central event in The Red Tent and is preceded by narrative both about Leah & Rachel and Dinah’s history, and followed by an imaginative account of what happened to Dinah after Genesis 34. There is a great deal of emphasis on the relationships between the women in Jacob’s family; the title comes from the red tent to which the women retired for 3 days during the new moon/menstruation cycle.

What on earth is Diamant’s deep-seated hatred toward the Jewish patriarchs? She has virtually nothing good to say about Abraham, Isaac, and Jacob, and makes Joseph into an arrogant, self-important man during his rule in Egypt. The women in the story are consistently bitter towards the men, as well as condescending (in their gossip in the red tent, not directly). While Diamant certainly knows how to tell a story, she seems to be attempting to convince her reader that the Jewish heroes are actually horrible people. Dinah is full of hatred towards them and is portrayed as a strong and noble woman (like her mothers, Jacob’s wives), a stark contrast to the men in the story. Only four men are shown any respect: Dinah’s two lovers; Reuben; and Judah.

Diamant’s retelling changes a major detail. The rape of Dinah becomes Dinah’s consensual relationship with the prince, and the acts of her family are then cruel, vindictive, and motivated by Simeon and Levi’s violent, angry temperaments. Jacob changes his name to Israel out of shame, because people speak of the deeds of Jacob as evil. There is no sense of family unity or togetherness in the entire book except for when the women come together in the red tent. Maybe that was the author’s point, but it wasn’t believable.

It was interesting to read this on the heels of The Da Vinci Code (bleh), where the female divine is such a focal point. The women of The Red Tent are very much in tune with the earth, the seasons, and the supreme female goddess, to the point of having bizarre – really bizarre – rituals regarding menstruation. I’m not sure where Diamant got such ideas, but I was better off before I read them.

As I said, I really did try to counteract the negativity I felt towards the book. But despite the creative storytelling, I was disappointed with Dinah’s lack of maturity throughout the book. She describes her life from birth to death, but seems to mature only physically and never emotionally or mentally. At the end she was just as petty and critical of others as she was in the beginning. Her voice makes it clear that in her eyes, she alone is blameless. She hates Jacob for disowning Reuben (who slept with Rachel’s handmaid, Bilhah) and Judah (who, although the story does not mention it, slept with his daughter-in-law). Dinah is adamant that Reuben and Bilhah shared a true love and should not have been punished for their passion.

Maybe that’s what was most irritating about The Red Tent – despite being an attempt to portray how women lived during Biblical times, Diamant doesn’t care about the social constraints and rules of the period. Even if Dinah willingly went to the prince of Shechem, doing so before an official marriage would be considered immoral. I’m shocked that Dinah’s narration does not acknowledge this at all, and that it excuses Reuben’s act on the grounds of love. This is simply too modern an interpretation.

I think that’s about all I have to say. Now that I’ve given you my negative view, why don’t you read The Red Tent and tell me what you think?

A few weeks ago, I was driving back from the grocery store and suddenly felt like I should return to school as soon as possible to finish my degree. I only have 2 semesters’ worth of classes left, and I’ve had vague plans to finish sometime in the 3 years that the Romgi is in law school here. So when I got home I looked at the classes I need, when they’re offered, what the deadlines for applying are…I had exactly 3 weeks to submit my application to BYU. I got the last paperwork turned in yesterday, which means –

this January I’ll be back on campus. I plan to do 3 sociology classes; my cousin and I have tentatively set up a babysitting swap, so she’ll watch the Bwun for an hour every afternoon, and once a week the Romgi will take him while I’m in an evening class.

I will be completing my general education requirements through Independent Study (retake a test? Why yes, thank you, I will) and doing my final 3 sociology classes next fall. And December 2010: done! And I can walk the following April. It’s really worked out amazingly well, especially considering how last-minute the decision was. I’m nervous, since I haven’t taken classes on campus in a while, but I love the classes I have lined up (assuming I get readmitted to BYU): Crime, Justice, & Corrections; Understanding Modern Societies; and Self and Society (taught by my favorite teacher).

I should hear back by the end of October, if not sooner. But – just a few classes stand between me and a degree! Wish me luck! 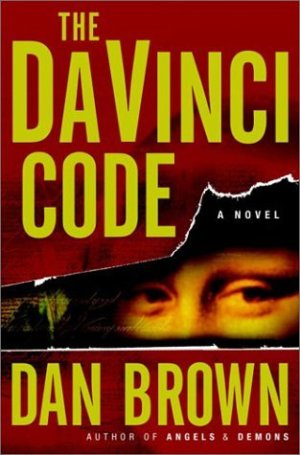 The other night I spent 5 hours reading The Da Vinci Code for part of the Countdown Challenge I didn’t finish on time. Here is a partial list of other things I could have done instead:

– ok, that was heartbreaking. Yes, it’s true, rather than play my favorite game I voluntarily read The Da Vinci Code in its entirety.

My apologies to Nintendo. It’s a sin I won’t commit again.