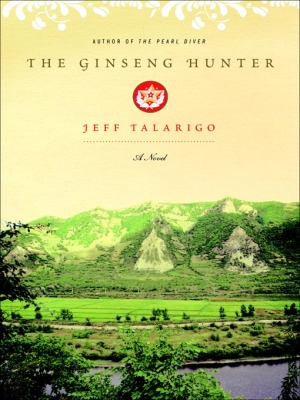 Since 2004, I’ve read 250 new books. About 3 every year make it onto my list of favorites. Ladies and gentlemen, I’m pleased to announce that The Ginseng Hunter has aquired a coveted spot on that list.

Talarigo has exceptional skill as a writer, and his subject matter is fascinating. The Ginseng Hunter is set on the China-North Korea border, and although the narrator describes scenes from his childhood during the days of Mao, most of it is present-day – like now. Talarigo spoke with North Koreans who had escaped into China and, presumably, from there to the US. Or someplace more welcoming.

In addition to chapters narrated by the main character, others are told in third-person but follow a North Korean mother and her daughter, who are trying to survive the harsh conditions there. They were heartbreaking, though in print it was easier to swallow than in film (please watch Seoul Train). It was interesting to see how different lives crossed paths or collided, and how our choices about our behavior to others may mean more to us than to the people with whom we interact.

I also was intrigued by the complexity of the main character, although as I reflected on it, he is actually a good example of how complex we all are. Yes, he is a ginseng hunter, and that defines a huge part of his existence – but there were so many other aspects…his decisions not only gave insight into his character but created his character, the way our choices shape us. 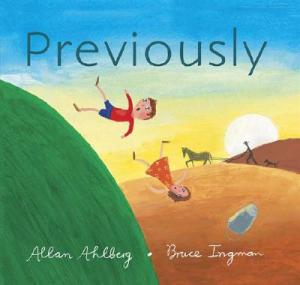 Previously tells several different folk tales and fairy tales, each starting at the end of the story and working backwards. Ahlberg tries to weave the stories together, although in 32 pages it comes out feeling very rushed. The illustrations are ok, though not spectacular. I did like the bright colors. However, I was altogether disappointed with the book. It was a fantastic idea, but not well executed.

Tweet: Previously Ahlberg had a killer children’s book idea, and previously I thought the book would be good. Sadly, we were both wrong.

Posted: August 6, 2009 | Author: Jarom | Filed under: Jurassic Park | 1 Comment
I don’t often do movie reviews. In this case, I am willing to make an exception.
Let me begin by saying that I really wanted to like this movie. Roni suggested I read the book Tale of Despereaux, and I really enjoyed it. I highly recommend it to anybody age 5 and up. It was an interesting take on the classic fairy tale.
Initial reviews I read of the movie were highly critical and seemed to unfairly compare the movie to Ratatouille, which was released about a year earlier. I felt, at the time, that reviewers were simply comparing the movie because both movies revolved around animated rodents. I now understand, however, why it is that they made the comparison. The makers of the Tale of Despereaux were not only inviting the comparison, they were begging for it.
It seemed to me that whoever did the Tale of Despereaux decided to not only borrow elements from Ratatouille, but chose to flat out steal characters from Ratatouille! Here is a comparison of two of the major antagonistic elements from each of the movies. 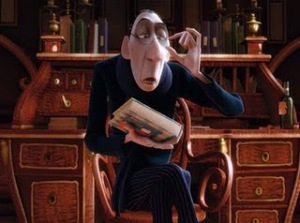 Botticelli, the main villain from the Tale of Despereaux
Please note the similarities. The elongated faces. The sour expression on the face. The hunched back. Even the voices for the two characters were nearly identical. It seems that the person who wrote the script for the Tale of Despereaux thought that if he combined the book and added elements directly taken from Ratatouille, he would have a sure success. Unfortunately, the combined elements are entirely superfluous, and end up muddling the story so badly that it bears little to no resemblance to the book.
The end result is a movie that is confusing for those new to the story of Despereaux, a brave but odd little mouse, and disappointing to those who are fans of the book. A truly subpar effort.
RATING (out of 5)
Visuals – .5 – the animation is sub par. I understand the desire to stand out from Pixar’s animation style, but this isn’t about style, this is about quality. The quality of the computer animation made it feel more like I was watching a made for TV movie.
Sound – 2 – The music was OK, as was the voice acting. Merely OK, is about the best thing this movie is going to get.
Acting – .5 – Voice acting seemed… forced. I especially disliked Sigourney Weaver’s narration of the story. It felt rigid and emotionless.
OVERALL SCORE – .5 – I have rarely been so disappointed by a movie.