Snow is not really my favorite thing anymore. Well…it never was my favorite thing, but it was fun. Until earlier this week. Monday morning I got up to take the Romgi to work and when we opened the front door, this is what we saw:

Underdramatization. There was double that much.

Actually, the Romgi had looked outside when he got up that morning and there was no snow on the ground. In an hour and a half we got too many inches for me to estimate, and I had the joy of driving up to Orem in it. On the way we saw a bus sliding perpendicular to the road and I honestly thought it was going to crash and burst into flames. (For some reason, I have a great fear of cars bursting into flames – particularly cars that I’m in.) Luckily I made it to Orem and back, but realized that I’d need to go back to tutor in the afternoon and to pick the Romgi up in the evening. Since a storm warning was in effect until 10pm, I decided to drive back to Orem as soon as the snow lightened up for a bit, and hang out at the Romgi’s work or the mall for the rest of the day.

I managed to get stuck in the “parking lot” of our backyard and had to have our neighbor push me out. But by the time I was actually on the road, the snow stopped falling. Completely. It didn’t start again until I’d been safely inside the Romgi’s office for a while. Fortuitous! Blessed! And miraculous! The rest of the afternoon it snowed horrendously (tutoring was canceled, so I didn’t have to leave the building except when I walked over to the mall), but at least the Romgi was able to drive us safely home after work.

Sidenote: we never found a Christmas tree small enough to fit in our car, so I tried to make our house more festive by putting ornament-type things up: 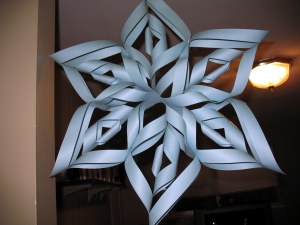 I made that! I'm awesome!

I made these too. Well, not the mirror.

Then: Christmas (a few days later, obviously). We hope we started a tradition by getting a bûche de noël from the French bakery:

It came covered in plastic things.

We did not eat the plastic things.

I expected that being with two kids ages 5 and under would mean we had to get up early early early on Christmas morning. Surprisingly, Brandon woke up at 8 but went back to sleep – and Anna didn’t get up until after 8:30. I call that late for little kids. Here are some of my favorite pictures:

Anna trying to decide if this present is to her or from her. 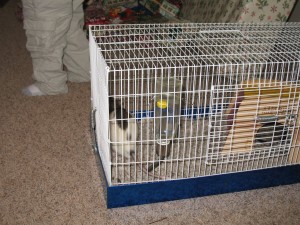 Typical - the Romgi's rat is sleeping, while mine is desperately trying to get the attention of a nearby person.

For me! The Romgi got me a pearl ring!

I did end up making Mom’s crescent rolls, and am proud to say I ate 9 of the 24. The Romgi made it to 5 this year, which is impressive. No one else managed more than 2. There is certainly something to be said for building up a tolerance for that much rich breakfast food at once. Those rolls are the best.

Despite the weather predictions of a major storm for Christmas, there was nothing but hail, wind, and a little rain at Besta’s house, and by the time we got back to Provo the 4-5″ of snow (they said there’d be a foot) had been cut down to about 2″ by the rain. So we managed to completely miss the bad roads, and instead had a great holiday!

Coming soon: my last book review this year, my completed 2008 reading list, and, of course, my 2008 Year in Review.

Coming not quite as soon: the Bwun. And the end of sleeping in.

P.S. My husband is super awesome.

8 Comments on “Me again”