I love ham. It should have gone on my list of favorite things, but…somehow it slipped my mind. Ham is especially good because I have it so rarely that it’s always a treat. I’d be overjoyed if we got to eat ham and turkey on Thanksgiving, ham on Christmas, and ham and lamb on Easter. I kind of think that would be perfect. You know what else is great about ham? Leftovers. Thick-cut ham sandwiches are rivaled only by thick-cut leftover turkey sandwiches. Ahh.

That being said, last night I experienced something new. It was called ham. But it was an impostor. 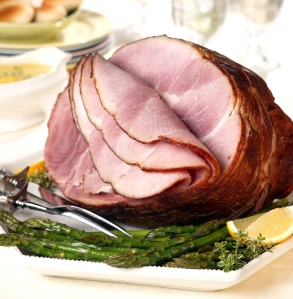 The Romgi and I went to the ward Christmas party, which promised lots of food and a nativity program by the kids. We got there on time and waited patiently for things to get started so we could eat. Sign-ups had been going around the past few weeks, and I knew there’d be many types of salads and potatoes; sure enough, when we finally got in line to get our food, there were easily 8 different types of mashed and funeral potatoes. (Luckily I sampled the best funeral potatoes. Some of the others looked iffy.)

We made it down to the far end of the serving table, where three platters of ham had been set out. The first two were too thick for my taste (yes, it is possible) and had the yucky skin-stuff on them (bleh), but the third looked beautiful. Slightly thin-cut, but the pieces were big and looked to be glazed with some sort of delicious glaze. I grabbed an extra large serving and headed back to our table.

When I have a plate full of holiday-type food, I start by eating a bite of potatoes, then some salad, stuffing, roll, fruit, potato, and finally meat. So it took a while to get to the “ham.”

It was not pleasant.

The problem wasn’t the pineapple sludge poured on top of it. That part I could mostly handle, and mostly scrape off. The problem was the texture of the meat itself.

This will probably sound disgusting, and it really was: imagine if you had some perfect ham, and for some reason you kept chewing it until the cows came home, and at that point you decided to spit it out, add a little something to make it creamy, turn it into a paste, and shape the paste into ham-shaped pieces.

I can’t think of any other way ham could be ruined so badly.

Ham is not creamy. It’s meat. Ham should not scrape off like liverwurst. It’s not canned.

Ham should not make me cry.

(It’s ok, I didn’t cry until around 1am when I wanted to barf. And that was mostly because I was really tired and grouchy and ill. Plus, I did eventually go back for a slice of the thick ham, which was a nice normal ham texture.)

And there you have it. That is the story of the pineapple ham paste.

P.S. We are beginning to consider the possibility that it was tofu or soy ham. What an abomination.