Today, I was a little bit late for work. Actually, I was a half hour late. But it was ok, I was still the first person in the office today. Yesterday was Pioneer Day, which is a real holiday here in Utah, and so nobody worked. I don’t know whose idea it was to put a day off on Thursday, and then NOT give everybody Friday off… but it sure wasn’t my idea. Pretty much everybody is gone from the office today, and the people that are here are having a “Christmas in July” party.

Anyways, back to the reason for posting today; I was late for work. I have a good reason, though (sort of). See, I thought I was at work. Does that make any sense? No? Let me explain.

Usually, I am very good at knowing when I am dreaming. A dream will get to a certain point, and I will be say to myself, “Wait a minute, why am I in Tahiti? And why did Roni just turn into a talking parsnip??” and then I will figure out that I am probably asleep, and that I am probably dreaming.

The problem comes when I have dreams where nothing is out of the ordinary. This morning the alarm went off, and I sat up to say my morning prayers. I remember finishing, having breakfast and then heading off to work. I arrived on time and starting doing stuff in the office. People showed up for the Christmas in July party, and everything seemed really normal.

Until somebody showed up with a pony. It may or may not have been purple. 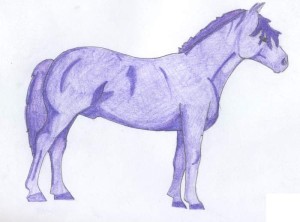 Don’t ask. Really, I don’t know either. At that point I realized that I never actually finished praying, and that I was going to be late for work; then I woke up. Does that ever happen to you? Not the purple pony, but do you ever dream that you are doing normal stuff? I almost feel like I wasted a dream.