← Mental
When it rains, it pours →

And the Winner is…?

Posted: February 7, 2008 | Author: Jarom | Filed under: Importance of Being Earnest |Leave a comment 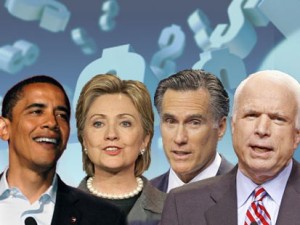 In honor of “Super Tuesday,” one of my professors held a sort of “what if..” election. He paired candidates form each party, and then asked the class who would we vote for. The results were interesting.

First in the lineup was Obama against McCain. He asked the class who would vote for Obama, and almost the entire class raised their hands. McCain, received absolutely no votes.

Next up was Hillary against Romney. He first asked who would vote for Hillary, and nobody raised their hands. When he asked about Romney, everybody’s hands shot into the air (not really surprising right? Of course the Mormons vote for the Mormon.)

He then pitted the two favorites against each other, Romney and Obama. This time the class was split about 50/50.

The final match up was Hillary and McCain. He first asked who would vote for Hillary, and one person raised their hand. However, McCain again received no votes. When asked why they had chosen to not vote, most people said they did not want to be part of a decision that put either of the two in office.