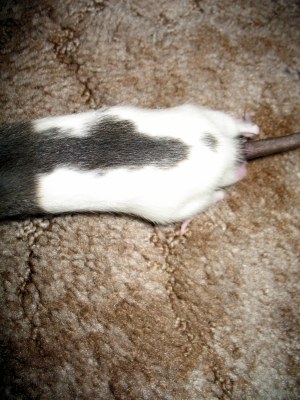 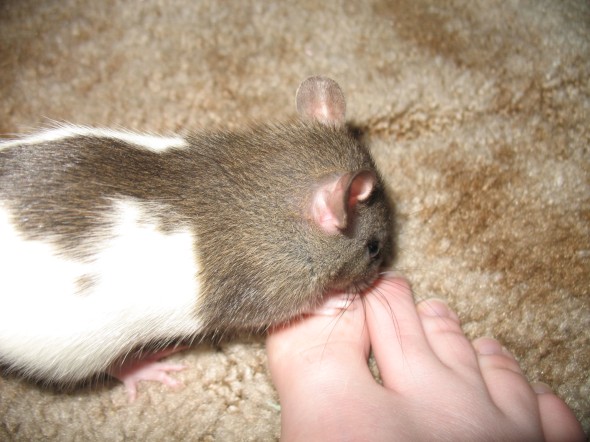 This is the only time he was still long enough to get a shot of his face. What should we name him? Vote now!

The Romgi and I put off celebrating Valentine’s Day because we had no car and really no way of buying each other presents or going out for a date. We were vague about when the make-up holiday would be, since it wasn’t clear when the car would be fixed. We finally got it back on Thursday (miracle of miracles!), and the Romgi surprised me today by coming home with presents. So I guess today is Valentine’s Saturday.

Now, for those of you who missed out, last summer we had a pet rat named Puppy. He was terrifically fantastic and tons of fun, but sadly, tragically, he died in late November. Then there was the unfortunate death of both our lizards, which meant we were pet-less. I was understandably upset about the lizards, but mostly I missed Puppy. (It’s kind of hard to interact much with lizards, you know, and Puppy was so social.) Imagine my complete shock — and joy — when the Romgi brought me a new rat! This little guy is tiny, about 10 weeks old, and a-dor-able. Honestly, he’s cuter than some babies I’ve seen. (Maybe.)

The thing is, I don’t know what to name him. That’s where you come in. I’ll post a picture of him and if you want to suggest a name, leave a comment. We’re going to get him a friend (also male) next week, so that he has company while we’re out, but the Romgi will get to name the other new guy.

P.S. I also got my very first box of chocolates (See’s, of course). In a heart-shaped box, no less! And the Romgi even remembered my favorites!