Evan really likes the idea of rhyming words, but the concept of “rhyme” has somehow escaped him. Last night, though, he came out of his room a few minutes after he’d gone to bed and exclaimed, “Mama, I know the answer! Bump and jump are rhyming words!” I thought that meant he’d figured out what it meant for words to rhyme, but today he asked if head and fire rhymed. Nope, not at all.

Because I’m also trying to teach Evan to read – he’s a little reluctant – I decided to show him that rhyming words end with the same letters as each other, but start with different letters. We got out some paper and I wrote words like cat, bat, rat, there are a million -at words . . . he recognizes enough of the letters that he actually sounded out a few words. Does that count as reading? At any rate, once we were done, he wanted to have some paper to write. He went in the other room and came back a few minutes later, proudly showing me that he made “the letter for June!” Sure enough, it was a backwards J. Who taught him this? Someone should take credit for teaching Evan how to write, because I certainly didn’t do it. On purpose, at least.

Next he drew the light in the living room, and the piano. Then he moved on to using crayons and this gem was the result. 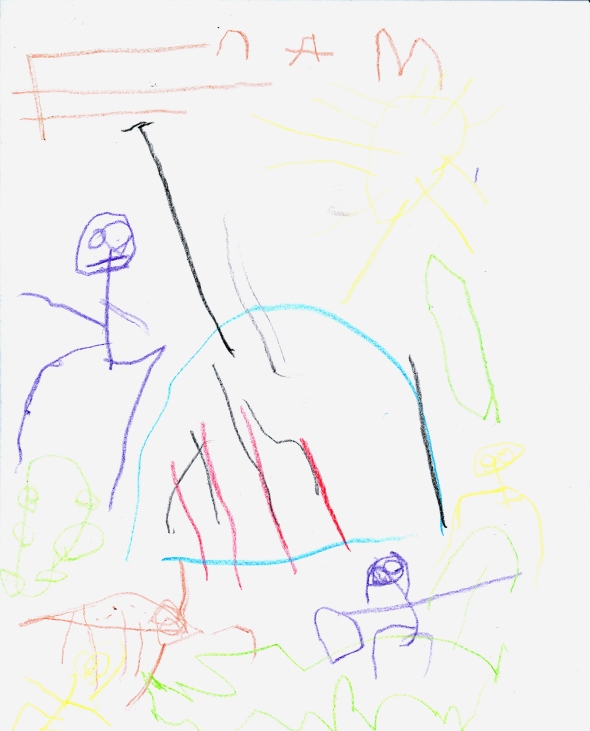 It’s a charming picture of our house on fire and us running outside to escape. 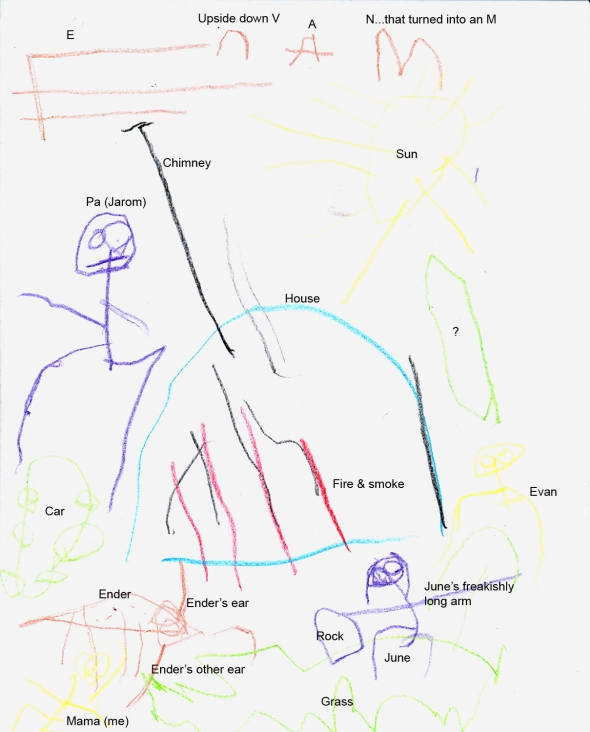 Evan asked me how to draw a person, so I showed him a stick figure on a separate piece of paper, and he took off with the idea – even adding eyes and mouths where mine had an empty face. I also showed him a dog but the majority of the drawing is Evan’s own design. As is the subject. He mentioned that the reason the house is on fire is that there’s no fireplace, so we made a fire on the rug. To be fair, we do have a chimney but no fireplace, but making a fire on the rug? I hope this isn’t foreshadowing.

Oh, and this was the first time I’ve ever seen Evan write his name. He did make the V upside down, and added an extra line on the N – for a first attempt, though (that I know of), it’s pretty impressive! He wanted to put it up on the fridge immediately but I did manage to talk him into letting me scan it first. I love this picture.