I’m trying not to talk TOO much about various art-ish projects on the blog, because I am hoping to make money off of them eventually . . . and I don’t want to sound like I’m begging you to buy stuff.

Guys, I’ve been working hard lately on figuring out what I want to do with my shop, and it’s unbelievably fun and exciting. I spent a while thinking about birthday and shower invitations – what originally got me started with this whole thing – and had trouble deciding what sort of designs would be likable (and easy to sell). Then I decided, I’m doing this for me – so that I have something I enjoy doing. If I make money, even just enough to keep my supplies stocked, hooray! But I lost interest in the idea of pandering to customers. So I sat down one night last week and designed a baby shower invitation. The next day, I designed a birthday party invitation for Jarom. (I’m going to try screen printing it and IT WILL BE AMAZING.) The next night, I completely designed and finished an invitation for Evan’s birthday party.

Most of the designs I came up with don’t actually involve any watercolor. They’re more . . . hand-lettered, and less painterly. I think I’m fine with this because I still have a lot of ideas for watercolor text and watercolor name art in particular. But I love the lettering aspect. Doing our graduation announcements last year was stressful but gloriously fun. (And stressful. Very stressful.) I think my stuff looks pretty awesome.

Here’s where I sort of want your mostly-honest opinions. Like I said at the beginning, I’m not trying to get you to buy stuff. I just want validation that these are legitimately interesting things that other people might buy. (Of course, I’m happy to do work for you guys, too.) The more time I spend looking for similar invitations and art on Etsy, the more I feel like there isn’t anything quite like this – and then I wonder if it’s because no one is interested. (Although, given the hideous nature of 80% of the stuff on Etsy, maybe that’s a good sign.)

Right, so, these are the things I’ve been coming up with lately. If you were having a party or bridal/baby shower, would you like these? I know I have a lot of polishing to do, so maybe you could base your opinion off the potential awesomeness here. 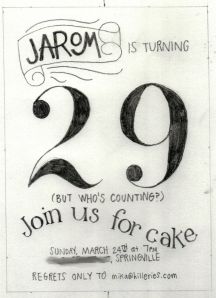 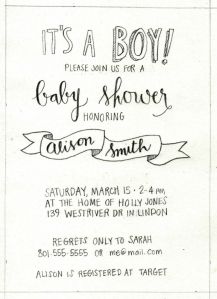 Sketch of baby shower idea. I always mess up on vertical spacing. 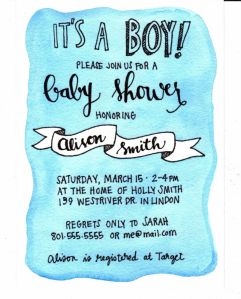 Watercolor of baby shower idea. The only waterproof pen I had on hand was a Sharpie, which didn’t work well. I think I’d leave the “It’s a boy!” in white and redo the registration note. I was trying to tie in with the other cursive, unsuccessfully. 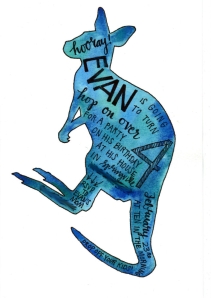 Evan’s birthday invitation. Since it’s going to 3- and 4-year-olds, I don’t care much about fixing any [minor] flaws.

P.S. Over the weekend I got in touch with a giclee printer in Orem who is willing to do my printing at a VERY reasonable price. This is what I’ve been looking for! Maybe actual progress and actual things-for-sale happening soon??