For the past few months, a fantastic lady in my ward has been organizing group field trips for moms and kids. It’s great because I get a chance to talk to other grownups, and the Bwun loves running around with other kids. Also, I can’t resist showing jr off. She’s really too cute. Anyway, this week – yesterday – we had a reptile show scheduled at the Monte L. Bean Life Science Museum.

I’ve been to the museum a lot of times; I volunteered there for a while my freshman year (it was for a class). I thought the Bwun would have a lot of fun seeing some live animals and a lot of stuffed ones. He’s two; he probably can’t really tell the difference. Maybe. So I got him hyped up about seeing a lizard (“wizard” or “shiddard” in Bwun-speak), snake, and turtle. I was just guessing about which reptiles they’d show us, but I was right on all three counts. 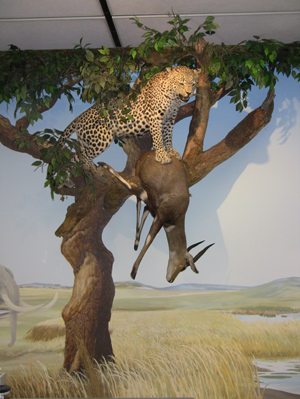 This is exactly the sort of exhibit the museum has.

The show was supposed to start at 11:15, so by 11:12 I managed to get both kids in the car. Sweet jr was sweetly asleep and the Bwun was excited to see the wizard. The parking lot at the museum is designated as a faculty lot, but there are some visitor spots. I pulled into one not far from the entrance and was less-than-delighted to be informed that I’d have to go get a permit from the museum receptionist. Picture this: you’re two. You’ve been hearing about the lizards and snakes and turtles for a few days, you get out of the car and go through the museum doors and– WOW! This place is amazing! There are animals everywhere! And a gift shop right there with TOYS! Now picture being dragged immediately back out of the museum to the car. It wouldn’t be pretty. (I avoided that by letting the Bwun stay inside with some of the other moms and kids who had already arrived, but if we’d come by ourselves, it would have been a sure disaster. Poor planning on the museum’s part, I think.)

I have to remind myself that the Bwun is only two. He’s little. He doesn’t have a long attention span. And to try sitting still while there were tons of animals around was really hard for him. When the museum employee came out with his reptiles, the Bwun wanted to go right up and stand next to the guy instead of watching from a few feet back. I can’t blame him. Also, it was “nap time.” The Bwun officially does not take naps, but there are days when he definitely does. This should have been that day. Instead, I had to try holding a crying jr (who unfortunately woke up just as the show started) while catching the Bwun by the wrist and pulling him back to sit with me. It usually ended in him throwing himself on the floor and sulking or, more embarrassingly, screaming.

We did make it through the reptile show, finally, and I figured I’d let the Bwun run around the museum for a little while. Well, it was a nice idea. Or maybe a really terrible idea. I was still holding jr in one arm, and carrying her carseat, the diaper bag, and our jackets in the other arm, trying to make sure the Bwun didn’t grab anything he shouldn’t. The museum has a kid’s play room so I decided we’d go in there, where at least I could sit down and let the Bwun play with some toys. After some more dragging, sulking, screaming, and plopping on the floor, we made it to the play room. There was one chair, occupied by another mom, who was texting while her girls played. The Bwun used to be – at least I think so – fairly good about sharing toys, mainly because he tends to watch other kids rather than interact with them. But, of course, this time he wanted to take the girls’ toys and be right up in their space. It must be so much easier to be a bad parent and not care what your kid does.

The major downfall to our trip was that I had a lot of homework to do, and we couldn’t spend much time at the museum. Getting the Bwun out of the museum was a nightmare. I had to pick him up and try carrying him in one arm, and jr-in-carseat, the diaper bag, and our coats in the other. As if that weren’t challenging enough, he was in complete tantrum mode. He was doing everything in his power to get out of my arms and he came pretty close. I kept having to stop and put the carseat down, grab ahold of the Bwun some new way so he couldn’t escape, and pick the carseat back up. It was a long process to get from the play room to the exit. And I was angry. Very angry. Again, I kept trying to remind myself that the Bwun is only two and this was not a fun experience for him (being dragged home, I mean), but he was fighting me tooth and nail and I wasn’t really excited about going home to take quizzes and write papers anyway.

Once we made it out of the building, I got to enjoy the stare of the people in the parking lot who turned to see the Bwun screaming, “HELP! HELP! HELP!” I did manage to get him into the car, but when I went around to put jr in, the car next to me was parked so close that I couldn’t even open the door, much less get the carseat in. Oh man. It was a moment, for sure. In the end I put the carseat in the passenger seat and very carefully maneuvered my car so I had enough room to get jr in properly.

By then the Bwun had apparently gotten over the worst of it, because he calmed down enough to let me know that he threw my jacket on the floor. Thanks, son.

On our way back to the house, the Romgi called and said he was done at school for the day. I was maybe a little too eager to have him come share in the misery of the Bwun’s tantrums. Luckily for me, the Romgi is a much more patient person than I am, and he took the Bwun grocery shopping. And…the Bwun slept the entire time.

I was ready for a nap, too. Maybe some other time.