With the recent revival of the Alien and Predator series, it was only a matter of time before this iconic 80s action franchise was brought back from the dead.  I’m pleased to say that this movie was actually quite enjoyable.

I have one major complaint about the progression of the terminator series, and I might as well get it out in the open right now.  It seems like the terminators are becoming less and less threatening as time goes on.  The first terminator was an (almost) unstoppable robot.  The second terminator movie introduced us to the wonderful world of CGI liquid metal terminators.  Terminator three seemed like they were stretching it when they combined the first two terminators to make a liquid metal terminator that still had the (almost) invincible robot shell.  How is this more threatening than a robot that can squeeze through any tight spaces.  Nothing in this movie was as cool as the scene where the second terminator walks through the bars in the jail.

I was interested to see what they would do for the robots this time around.  I don’t want to spoil it for anybody, but I don’t think they managed to match the awesomeness of the liquid metal terminator in this movie either.

The events of this film take place after the robot apocalypse (Judgment Day).  Humans exist in small communities and are actively fighting against the terminator armies.  The atmosphere of the movie is well done.  You are left feeling that all these people live in a vast wasteland and are fighting for survival.  Kind of like Las Vegas.

Both sides of the war are searching for a cure-all which will end the war for good.  Both sides think they have found it.  Spoiler alert, it backfires on both of them.

The movie was well made, with great attention to detail (though not necessarily plot).  Particularly the sound effects for the robots was spot on.  This may seem like a minor detail, but in a movie about a war between robots and humans, it is important.  The special effects were also well done; I never once missed the old stop motion terminator.

It was a good action flick as long as you don’t think too long about the first three movies and the timeline of events.  If you need a good action flick, this one wasn’t quite as good as Alien vs. Predator, but was better than Indiana Jones and the Kingdom of the Crystal Skull.  My one major comlaint would be that Christian Bale talked in his batman voice the entire movie.  It was a bit much.  Despite this, I give this movie three and a half “I’ll be backs.” 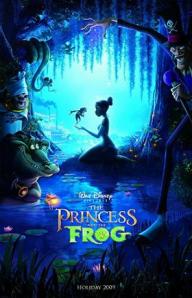 When I heard that Disney was making a princess movie set in New Orleans, I was a little bit confused.  A princess?  in New Orleans?  When was there a kingdom in New Orleans?  I knew this wasn’t going to be a movie I rushed to see in theaters, but I am glad that I had the chance to watch it.  One some levels The Princess and the Frog exceeded expectations, but on other levels it disappointed.

I am pleased to say that Disney did not do anything so ridiculous as attempt to create a kingdom of New Orleans.  In fact, they seem to acknowledge that the “princess” in the firm is stretching what it means to be a princess (the main character’s response to who the princess is, “Wait, does that even count?”).  The main character isn’t a princess at all, but is a waitress.  She is also perhaps the only genuinely likable character in the movie.

Tiana believes that hard work and dedication will help her achieve her dream of opening her own restaurant.  She finally gets enough money for the restaurant, if she can only manage to make it through the big catering gig with the richest family in town.  Of course, it is at the party that everything goes horribly awry.

We are also introduced to prince Naveen of Maldonia, who is perhaps the least likable character in the movie.  He starts the movie as a jazz-loving spoiled ladies man.  He stays this way the entire movie until one of the musical numbers, where he suddenly changes.  Now he is a selfless prince whose heart is dedicated to one woman.  It was just a bit too much all at once; there was no buildup to the moment of transformation.

Though I didn’t especially like the movie’s prince, I did enjoy the animation.  The animation was wonderful; it was obvious that a lot of work and care went into making the film beautiful.  The movie also met the #1 criteria of any movie, it was entertaining.  However, it was not without flaws.  The musical numbers were uninspired and boring.  And some characters seemed  were pulled directly from other popular Disney movies.  The prince’s bumbling and scheming sidekick seemed to be an exact copy of Nathaniel from Enchanted.  The evil voodoo shadow man seemed to borrow heavily from The Little Mermaid’s Ursula.

Despite its flaws, the movie is worth watching but probably not worth buying.  If you have netflix and you enjoy Disney movies, it you should add it to your que.  The film gets two and a half ribbits.