Since we found out about Tiny Baby almost four weeks ago, Mika and I have been make a concerted effort to spend more time with each other.  This isn’t an easy thing to go through, and the least we can do is shoulder the burden together.  We don’t always do anything exciting when we go out, but we always get to go something together and without the kids.

Today, we went to see Jurassic Park in theaters.  As many of you have heard, this year they have decided to re-do the Jurassic Park in 3D.  At first, I was skeptical.  First, this is one of my favorite movies of all time. Furthermore, movies not originally filmed in 3D have a tendency to look dark, muddy, and confused when studios do a 3D conversion.  Finally, I was concerned that they would try to modernize the computer graphics from the original movie and make it worse.

Jurassic Park is probably my favorite movie of all time.  It is one of the first movies I remember being able to go and see by myself.  There was a theater in our hometown that showed movies for $0.50.  They even had special days when a movie was only $0.25.  They kept Jurassic Park running in that theater for over a year.  As a result, I saw the movie well over 10 times in theater that year.  As a kid, I loved it for the dinosaurs and action.  As an adult, I grew to appreciate the movie for its technical accomplishments and interesting characters.  I appreciated the movie even more after reading the book.  I was worried that in the re-release, the studio would try to add in deleted scenes, or otherwise change the movie (I’m looking at you, George Lucas!).  I am happy to announce that all of the things which make the original movie great are still there!  As far as I can tell, no new scenes were added, and the splendid pacing, character development, and soundtrack of the original remain.  Experiencing the movie in the theater once again was truly enjoyable.

Movies that are converted to 3D seem to fall flat.  Because of the process used to create 3D movies, the movies can often end up looking muddy and dull.  My only previous experiences with movies converted to 3D were Clash of the Titans, and The Last Airbender.  Both films had botched conversions and ended up looking substantially worse as a result.  While there were certainly times when the 3D conversion in Jurassic Park looked more like a pop-out book than an actual 3D movie, by and large, the 3D was quite impressive.  There were no gimmicky tricks added in, and the film did not suffer horribly from the conversion.  There were even several scenes that I felt were enhanced by the addition of the third dimension.  In this end, this is really all I can realistically ask in a 3D movie.

Beyond the addition of 3D, there were no noticeable alterations to the computer graphics from the original.  The computer generated dinosaurs were a monumental achievement at the time of the original release of the movie.  Even now, I often watch the movie and marvel at how much better the graphics were in Jurassic Park than in many modern movies (I’m looking at you, Jack the Giant Slayer).  Part of the charm of the original Jurassic Park is the creative and innovative combination of animatronic dinosaurs and computer generated dinosaurs.  I was very relieved to see that the old graphics remained unaltered.  I honestly still found them to be impressive on the big screen.

Overall, I truly enjoyed the movie!  Whether you are an old enthusiast, or seeing the movie for the first time, I definitely recommend catching Jurassic Park while it is in theaters.

The Hobbit: An Unexpected Review

When I first heard that Peter Jackson was at the helm of the movie version of The Hobbit, I was fairly excited.  Then I heard that they were going it in two movies, then it was three movies.

Regardless, I was excited to see the movies, because I enjoyed the book as a child, and I enjoyed Peter Jackson’s rendition of Tolkein’s Lord of the Rings.  Mika and I made the effort to see the movie.  This is kind of a big deal, as we typically make it to only one or two movies together in a given year.

I am surprised to see myself saying this, but here it is: skip this movie.  While I enjoyed the parts of the movie that were actually part of the book, the movie felt ill-paced, boring, and forced.

The pacing of the storytelling was horrendous.  It felt as though it took a good 30 minutes to just get to the movie!  There is a reason that movies leave out certain parts of books.  Not all aspects of a book, even the most well-written books, are fit to be put on the silver screen.  Now imagine that instead of trimming parts of a book down to the parts best suited for visual adaptation, you keep in all of the parts regardless of how well they work.  Not only that, but you’ve added in extra parts to make it feel longer.  Imagine a Lord of the Rings film where they not only included Tom Bombadil, but also the biography of Tom Bombadil’s wife as recorded from Tolkein’s private notes.  With all of the unnecessary parts added in (or embellished from the book), the movie did not flow well.  While the parts of the movie that were actually in the book were interesting, were well thought-out and were able to maintain my interest, there was at least an hour of material that were not.  The 30 minute introduction, and the additional 15-20 minutes spent on Radagast, and another 15-20 minutes spent on the white orc completely ruined the natural flow of the story.  The experience felt like the makers were trying to justify making three movies, rather than tell the story of The Hobbit.

This led to the next problem, the movie was boring.  One might assume, and justly so, that in a movie lasting 2 hours and 40 minutes, you would walk away feeling entertained.  You might hope that you would walk away feeling like you knew the characters.  However, it was to the contrary.  The portrayals of the characters were muddied by the additional parts added in Jackson and his crew.  By two hours in, when the movie had finally reached full steam, I was already worn out by tales of dragons, how dwarves mine, and a wizard covered in bird-feces.

Finally, the movie felt forced.  The Hobbit, by its nature as a children’s book, was a much lighter tale than The Lord of the Rings.  It is much more a fairy tale, and much less an epic fantasy novel.  It is filled with silly songs, riddles, and lighthearted banter.  While the movie still had these things (how can they justify cutting anything when stretching a story this much?), it also felt as though it were trying to be as serious and somber as The Lord of The Rings.

In short, when I walked out of the theater, I thought, “I don’t want the director’s cut; I want the audience cut.”  I want a version of The Hobbit with only the best parts of the book.  I want a version without the extra bits added in.  I want The Hobbit that I can sit down and watch two hours and forty minutes and get the whole book!

Sometimes, I can’t stand watching old movies.   I remember one time in particular when Roni and I were staying in a bed a breakfast that only had old VHS movies, and we tried watching one.  It was horrendous.  Terrible sound, terrible acting, and terrible story.  Really horrible stuff.  Much to my chagrin, I have even found that there are some “classic” movies that I just don’t like (I’m looking at you, Soylent Green).

But every now and then, I come across a older film that has truly earned the title of classic.  Alfred Hitcock’s Dial M for Murder is such a film.  The film is as intense and suspenseful today as it was in 1954.  Hitchcock did a wonderful job with this film adaptation of a play; everything from the casting, dialogue, to the pacing is spot on.  In short, Dial M for Murder is the perfect suspense film. 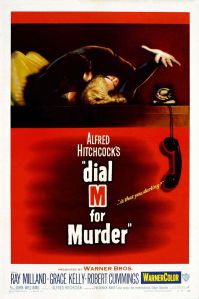 The actors play their roles with such perfect execution that it is easy to forget you are watching a movie.  Grace Kelly plays Margot Wendice, the wealthy wife of a famous tennis player.  She plays the part with such, well, grace that it isn’t hard to feel sorry for her predicament.  When she’s fighting for her life, you want her to live.

Ray Milland also has a standout performance as Tony Wendice.  He plays Margot’s husband with such cold, methodical, calculation that you cannot help but be unnerved.  This is a man who has spent years figuring out how to kill his wife and avoid all suspicion.  As the audience behind the fourth wall, you are the only ones aware of his double-faced act.  As such, when he acts suavely with such faux-concern around Grace Kelly, your skin crawls.  When he details his plan to his accomplice, you cannot help but shudder at the fact that there are such people in the world; he plays his part with such sincerity you cannot doubt that such people exist.  He is one part Christopher Walken, one part James Bond, and three parts terrifying.

The plan put forth by the husband seems so flawless, that you spend the first half the film worrying that the plan will work, and the second half of the film – well, I suppose you will just have to watch to find out.