Movies I love that Critics Hate

Every now and then there is a movie that I really enjoy. I think that it accomplishes whatever it was that it set out to do, and made me enjoy the journey. These movies are not always movies that critics enjoy, but you can’t always trust what critics say!

1. Stranger than Fiction
I love this movie. I may have a slightly rosy view of this flick because of when I saw it. The night I proposed to Roni, we were on our way to see this very movie. This is a movie about a guy who hears voices. Not just any voices though. This is a person narrating his life, as it happens. It turns out that a local author is writing a novel about a person who she believes is fictional, but who is very much real. I like this movie because it is not your typical Will Ferrell movie. It is (I think) a very original idea for a movie, and does a very good job at making the movie not only fun, but somehow believable.

2. Secondhand Lions
Family movies are a tough sell. You have to make it interesting enough for kids, funny enough for the older kids, and entertaining enough for the adults. This is a movie that I feel does all of those things very well. It is sweet without being sappy, and I think it has a great story. This movie is about a young boy whose mother drops him off to live with his eccentric uncles for the summer. It has humor, adventure and just about everything in between. If you want a family movie, this is one I strongly recommend.

Do you guys have any movies that should go on this list? Movies that you love, but critics hate? If you do, then leave a comment!

Yesterday in church the first speaker gave what I’m sure would have been a great talk had he not ruined his credibility in the first two sentences. The talk started something like this:

“Maybe I’m dating myself here, but there used to be a bunch of commercials with this dog named Scruff McGruff, who warned kids to stay away from crime.”

Everyone likes Scruff McGruff! And in fact, he’s still around, with his own website and even a blog.

The speaker continued, “Scruff McGruff said something at the end of every commercial that I think is really worth mentioning: ‘Knowing is half the battle.'”

You see the problem, right? Seriously, I thought everyone knew that it was the G.I. Joe cartoon that always ended with “Now we know, and knowing is half the battle!” 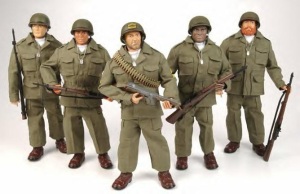 The real source of the quote.

It doesn’t even make sense for Scruff McGruff to say that “Knowing is half the battle.” If you know what things are criminal, you can avoid doing them? I dunno. Seems shady to me.

Thanks, older brothers, for watching the G.I. Joe cartoon so that I could feel smug and superior during church yesterday!

The first time we made cup pies, they were apple. Delicious. So delicious. We put a crumb topping on them (really simple – just flour, sugar, and butter), for extra tastiness. And we used a homemade piecrust, which turned out perfectly.

So here’s the recipe for you. I borrowed it from my cousin Jennifer, who was given the recipe by her mom. It really is easy as pie.

Combine the flour and salt. Cut in the shortening. In a separate bowl, combine the egg and milk; add to the flour mixture. Stir until just moistened – do not overmix. Roll out on floured board. Makes 2 9″ piecrusts or about 18 cup piecrusts.

P.S. I want a pastry cutter. And there are pictures of the cup pies now, in the original post. Yum.