I’ll admit I was skeptical the first time (ok, the first hundred times) the Romgi told me about his idea for “cup pies” – which he described as being “like pies, but in a cup.” I insisted that they would basically be tarts. He said I was wrong. I said he was wrong. And so we never made cup pies.

…Until recently. Remember when we made apple pie at Quimberlee’s? They gave us a huge bag of apples to take home, and the Romgi really wanted to make little cup pies out of them.

Turns out he meant making them in cupcake tins, so they’d be cup-pies instead of cupcakes, and instead of tarts. Which actually seems to mean he was right. Not only that, I now concede that cup pies are a brilliant invention. Perfectly shaped, perfectly sized, they’re adorable, delicious, and fun to give to neighbors. We gave some to one of the other three couples in the duplex (divided into main floor and basement – we’re in the other basement section), and they ended up inviting us over for FHE this week. It was like having friends! …It was so cool!

Also, last week we went up to American Fork to gather walnuts that this lady didn’t want (I think she was allergic, and the tree came with the house). We got tons and tons…and finally got them husked and shelled, then chopped them up to make maple walnut cup pies. Tasty!!

So, the Romgi, this is my public statement that you were right and I was wrong. 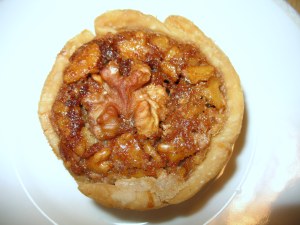 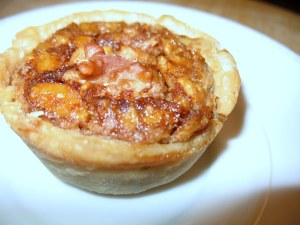