While we were in Southern California for the funeral a few weeks ago, we had a chance to look through some of the stuff Jarom’s grandma had collected over the years. She had an extensive fabric collection, and it was fun to see the patterns that would now be considered vintage. I fell completely in love with one fabric but knew I’d never get around to doing anything with it.

So it was delightfully delightful to get this pillow in the mail yesterday! Jarom’s cousin’s wife Crystal, a master with a sewing machine, used the awesome fabric to make a phenomenal pillow for my orange couch. Isn’t it cheery?! I wish I had a dozen of them! 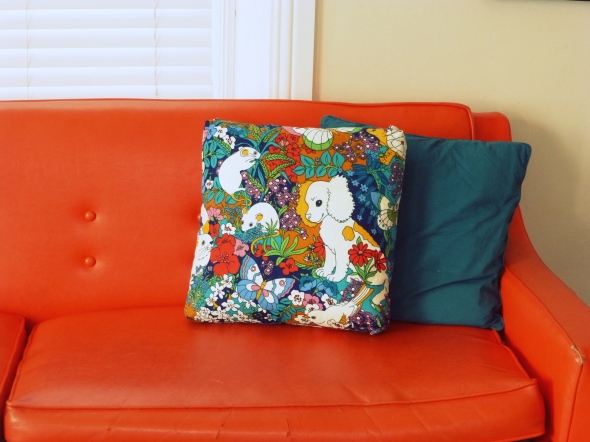 Also, the kids have been pretending that the dog on the pillow is Ender (it does look awfully similar), and they talk to him. A lot. It gives poor Ender a break from their attention!