June has entered an unpleasant phase – she hits and punches Evan whenever she gets upset. It’s obvious that she does it to hurt him. Of course she goes straight into time out for hitting, punching, kicking, slapping, and so on, and we always have a talk afterwards about why those things are bad – and she can demonstrate what “soft” or “nice” behavior would be. But she’s so impulsive that it seems she can’t resist responding with violence when she thinks Evan has wronged her.

I know she’ll eventually get the message that what she’s doing isn’t ok, so for now I plan to stick with the time outs and discussion – June is smart enough that she understands the concept, it’s just hard to apply. Because she’s 2.

Evan went through a similar phase at a similar age, and he grew out of it. But it started when Jarom was in Korea for an internship while I was pregnant with June, so I had a hard time dealing with it. Fortunately it seems that a lot of things are easier the second time around, and I’m not as worried about June turning into a violent criminal. (At all, really. Can you imagine?) I don’t mean that I let her bad behavior slide or that I act unconcerned – I just don’t spend extra time fretting that I’m not doing a good job of parenting. For that reason, at least.

If your kids skipped this phase, please don’t tell me. I’d like to assume it’s standard. 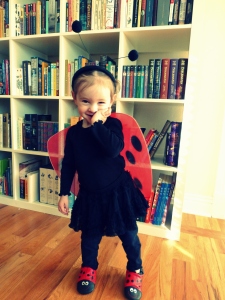 Hard to believe this ball of cuteness could ever be mean-spirited.