School, meh. It’s still there and I’m sort of paying some attention to it.

I did do the whole Etsy thing sooner than expected, though. Sadly I don’t have the time to devote to making it as amazing as possible. Later, right?

(And I am rediscovering a lot of knickknacks we have around the house, and also that photography is not my thing. I should probably team up with a real photographer…hmm…)

Posted: February 16, 2012 | Author: Mika | Filed under: Bridge to Terabithia, Dangerous Book for Boys, Haroun and the Sea of Stories | 5 Comments

I don’t care if you think less of me for it: The Secret Garden is one of the greatest books ever, and the movie (1993) is perfection. Magical. Maybe my favorite movie of all time (except my other favorites).

Remember the part in the movie where Dickon tells Mary that the garden is still wick?

Rather than go put in the movie (since it’s past midnight and almost 1am already), I got out my handy-dandy pocket-sized edition of The Secret Garden to look up the wick part. And then I realized, I don’t own a regular-sized edition! How is this possible?! Someone buy me one, quick!

So Mary shows Dickon the secret garden and worries that it’s dead.

‘Is that one quite alive – quite?’

‘It’s as wick as you or me,’ he said; and Mary remembered that Martha had told her that ‘wick’ meant ‘alive’ or ‘lively’.

‘I’m glad it’s wick!’ she cried out in her whisper. ‘I want them all to be wick. Let us go round the garden and count how many wick ones there are.’

. . . He knelt and with his knife cut the lifeless-looking branch through, not far above the earth.

‘There!’ he said exultantly. ‘I told thee so. There’s green in that wood yet. Look at it.’

Mary was down on her knees before he spoke, gazing with all her might.

‘When it looks a bit greenish and juicy like that, it’s wick,’ he explained.

I do have a point, besides letting you read that excellent excerpt from that excellent book. I’m sure I told you already that Evan wants a Totoro party for his birthday. Pretty much zero other kids his age know what Totoro is, so I went a very interpretive route for invitations. 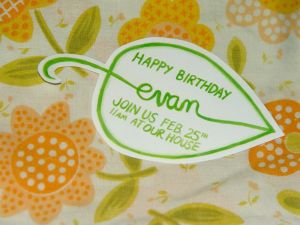 Also, hopefully we can handle 4 other kids at our house for an hour. Are they still toddlers or have they moved on to preschoolers? Because June is a toddler, and there’s a big difference between her and Evan. 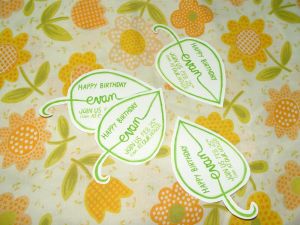 P.S. Evan is almost 3 years old. This is kind of a big deal.