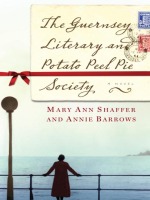 I’m secretly a little disappointed that this book was good. I didn’t expect it to live up to its hype. Or maybe I just wished I had more unique taste than “the masses.” Honestly, that’s the same reason I held off on reading the Harry Potter series…what’s my deal?

Alright, so The Guernsey Literary and Potato Peel Pie Society is written entirely in letters (with the odd telegram thrown in) and takes place during WWII. It’s amusing, touching, interesting, and educating (insofar as it’s historically accurate, of course). For a moment I was going to say that the only two epistolary (!) books I’ve read were both British, but I remembered that Dear Mr. Henshaw is another – and definitely American. (The other British book was Sorcery and Cecilia. But – silly me – I also read its sequel, The Grand Tour, which I guess makes four epistolary novels I can think of at the moment.) Back to where I was, though: TGLAPPPS was every bit as good as I had heard. My only complaint is that despite its solemn topic and sometimes tragic storyline, at the end I almost felt as if it lacked substance. The plot finished a little too neatly and happily.

Have you read it? Am I way off here? Maybe I just wanted some tiny aspect to criticize so I felt superior to the masses…

2 Comments on “The Guernsey Literary and Potato Peel Pie Society”