I ought to be working on a paper. Two papers, actually. And studying for two tests. (Haven’t even made it to finals yet.) Better yet, I should be taking a nap while both kids are quietly contained in separate rooms.

Instead, I thought I’d give you hope that this blog will continue.

June turned one a few weeks ago! We had a party. I think milk and cookies makes great first-birthday fare, especially if you just buy the cookies. I planned to make these – they sound delicious – but who am I kidding? I don’t have time to make cookies, even with a full-size oven. Which I also don’t have. Wait! Back up. First I wanted to show you the invitations I made, because I did have the time and energy to paint, and these turned out amazing. See? 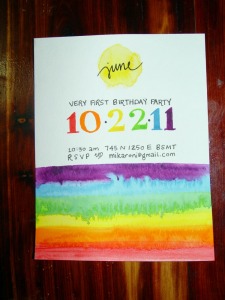 It seemed fitting to go brightly colored, as June’s personality is pretty cheerful, so I did a rainbow theme for the party. I had a whole Pinterest board of ideas, most of which never happened. I ended up with this: 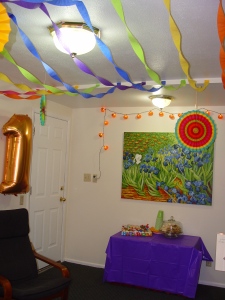 (I was really, really excited to get that giant gold 1 balloon. We’ll definitely get a 3 for Evan’s birthday – sidenote, 3 soon? How?)

June had fun opening presents, more than Evan did at his first birthday. The cake, though…I made a tiny cake (it was really hideous. Never let me bake anything again) with frosting and sprinkles, but all she did was poke it with one finger. Then a different finger. Eventually she was cautiously placing both hands in the frosting. Even after Jarom showed her the cake underneath, she was uninterested. I think we had the right idea giving Evan a donut when he turned one. My kids definitely know what to do with those.

Unrelated story: A few days before the party, we took the kids trick-or-treating at the law school. June grabbed a Tootsie Pop without me noticing right at the beginning and managed to dissolve the wrapper and pretty well eat the entire sucker. Needless to say, she was completely coated in sticky drool. So were Jarom and I, who had switched off carrying her. Yuck.

But. Also, June is adorable. And walking! 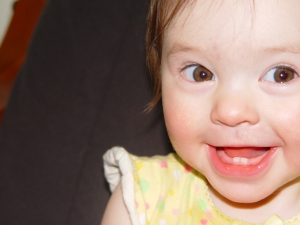 (Sorry, walking is not pictured here.)

Evan is imaginative. He likes to pretend he’s a monster, pretend he has friend mice who go outside to play with him and the neighbor’s little girl, pretend June is in trouble and he has to rescue her, and run around the house shouting nonsense words. I suspect he’s a pretty typical little kid. Also, like June, he’s adorable. 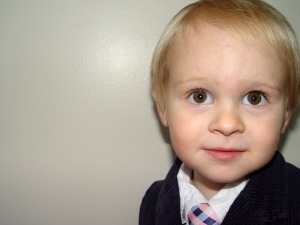 This Christmas we’ll be taking the train to California, and Evan is desperately excited. Me too. I’ll be honest, though, a lot of my excitement is along the lines of “School will be over! I’ll just have the normal stress of traveling with two kids! No homework! No tests! School will be over!” Can you tell I’ve been pretty occupied lately?

I’m in the process of designing graduation announcements for Jarom and me. They will be amazing. Seriously, I’m doing the design and having them letterpressed by a local artist. It’s a big deal! (The graduation is, I mean. And the announcements will reflect that, I hope.) It keeps me at least a little bit motivated to finish up the semester.

Speaking of, I really ought to go work on that paper now.

P.S. There was an unusual adjective I wanted to use as the title of this post, but I couldn’t remember it, so I googled “unusual words.” The first site was this list of unusual words, one of which was “lethologica,” which is formally a psychological disorder of forgetting key words and phrases but colloquially an inability to recall the precise word for something. Correct me if I’m wrong on that.