This post is brought to you by my typical late night insomnia-driven breakdown.

What’s meaningful in your life? What makes you feel something? Do you talk about it? Do you let people know when they’re meaningful to you?

It’s easy for me to be critical, cynical, or cross. It comes perhaps a little too naturally to deride others and to forget – or ignore – that they’re regular people, just like me. (Some are taller, and therefore intimidating, but let’s call them regular people anyway.) I find it much more challenging to admit that I have real emotions and that I find joy in my life. Expressing pleasure or displeasure is one thing; for me, at least, expressing true joy is another – it requires a degree of vulnerability.

I wanted to take up my Habermas battle cry again and say that we ought to be more forthcoming about what we think and feel; here I’d like to address how we infrequently let others know how meaningful they are, or their experiences are, to us. Of course, there are plenty of indirect ways to communicate this to others, but over the past few weeks I’ve had two instances where I felt a direct statement would be most effective.

First, my neighbor’s sister went into labor halfway into her pregnancy. Her tiny baby boy lived less than 3 hours. It was heartbreaking to hear about; I despaired, thinking that nothing I could do would comfort or help their family in any meaningful way. After making a donation to their medical fund, what possible aid could I give? And yet surely saying nothing was worse than just expressing sorrow and sympathy. Several days ago I was playing outside with the kids when my neighbor’s sister came by. I told her how sorry I was, how much I wanted to help, how deeply I felt for her. I suppose it was just words; I didn’t do anything. But the words seemed to be meaningful to her – and I think it was because they were meaningful to me. I tried to truly convey my feelings, without shielding them in any way. I think we often downplay our tender emotions; they make us vulnerable. In this instance I was fairly unconcerned about my own vulnerability. I just wanted to let her know that I was beginning to understand the admonition to mourn with those who mourn.

Second, one of my closest friends had her first baby and we went to the hospital to visit them. I’d been thinking a lot about what motherhood means to me. It really is incomprehensible. There’s simply no way I could have understood this depth of feeling before having kids. And I hoped I could tell me friend how happy I was for her – and her husband – that they were having this experience. It sounds silly, but words escaped me. I ended up babbling something about “We’re really, really happy for you; being parents is so wonderful,” and I’m fairly certain I sounded ridiculous. I was near tears. I wanted to hug everyone in the room. I doubt that my point got across at all, because I felt so awkward saying it. It was almost easier to communicate sorrow than overwhelming joy.

Last week the Romgi and I spent a night away (and we’re very, very grateful to the family members who watched our kids!). The Romgi fell asleep quickly, as anyone who gets up at 6am is likely to do. I commenced one of my typical late night insomnia-driven breakdowns – I can’t remember the exact reasoning anymore – after which I had a series of epiphanies and began mentally composing this blog post. One of my epiphanies was that we become knit together as people by sharing meaningful experiences with each other, and by letting others know that they are meaningful in our lives.

I suspect that the following is a statement every parent dreams of hearing for years, and it only comes long after the dream has been given up: Mom and Dad, thank you for all you’ve done for me. As a child I was completely ignorant of the countless sacrifices you made in my behalf – the plans you put on hold, extra hours you worked, the tantrum-filled toddler years and sulky teenage years you endured, for the simple reason that I’m your daughter and you love me. After becoming a parent, I look back on my (short) life and find it filled with meaning because I begin to understand the great effort you’ve put into raising me. I don’t feel particularly comfortable saying such…emotional things, but they are sincere.

The Romgi, you are absolutely my favorite person. (I hope no one is offended by the fact that the rest of you are not my favorite. I do like you all. A lot.) I love that together we’ve created a world full of meaning. In the words of a Korean drama, the best house is the one you build in the heart of the one you love. Sappy enough? It’s true. I’m happy knowing that whatever our experiences in life, we’ll share them with each other. I have many other things to say. I’ll write you a whole blog post.

Everyone else: you’re all meaningful to me in some way, and I’d like to tell you that. If you leave a comment – just a simple “I’m here” – I’ll email you something wonderful. (Of course, that means you need to enter your email address. It won’t be shared with other readers.)

My final thought is that I want to embrace the joy in my life more, whether it’s the mundane (a Dunford donut) or the profound (a box of Dunford donuts). (Sorry, I couldn’t resist. And once the Romgi went out at 11pm to get me a donut, and it was an unbelievably perfect donut, and the whole thing really was meaningful. Haven’t you tried Dunfords yet?) I don’t want to ignore or suppress the deep emotions that make life worthwhile.

After jr was born I felt really comfortable with just having two kids. Between the Bwun and jr, things seemed complete. Of course, everyone told me I would change my mind – though I still disagree that deciding to have a third child is somehow inescapable.

A few days ago one of my best friends had her first baby, and we got to go see them in the hospital.

The real trouble is that recently I had a three-hour stretch of “I desperately want another baby (eventually)” hormone-fueled desire. It went away, aided by the fact that I already have a (relatively) wild toddler and a currently-clingy baby. But for those three hours, it was hard to argue with the feeling. It was intense. And then after I’d gotten over it, I held a newborn. A tiny five-pound newborn bundled up in a hospital blanket. The feeling definitely came back.

I was sort of counting on the Romgi to talk me out of it or remind me that I said “NO MORE KIDS” repeatedly (quite forcefully, I might add).

Instead he just said, in his mild way, that it would be fine after we graduate in April.

The stubborn part of me wants to change my mind back to “two kids is enough,” for no other reason than to prove everyone wrong. I don’t want to be convinced that I want another (eventually). 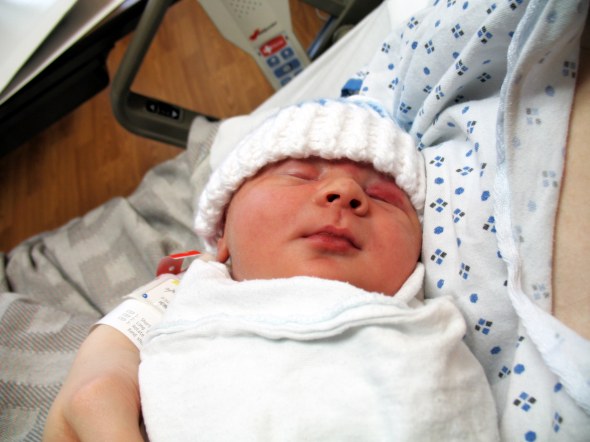 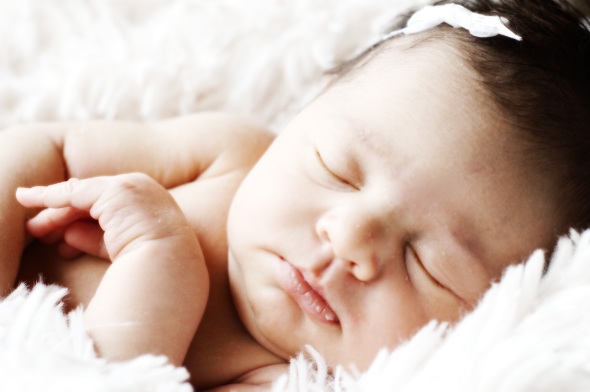 I’m nothing if not a follower. I recently saw this amazing dip-dye look and had to do something similar.

Sorry, Mom, but I put purple in my hair. 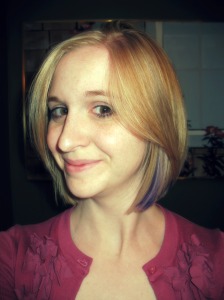 (Well, more accurately, I paid someone competent to put purple in my hair. And I love it.)