I admit, birthdays are just not as much fun when you’re a grownup. It’s not a free do-anything-you-want day; I still had to change dirty diapers and deal with fussy kids and clean up the house. Actually, I didn’t go to bed the night before my birthday – I stayed up to bake the cake and clean the kitchen. Since our Harry Potter movie marathon, the house sort of fell apart, and it needed my help.

Since I feel indifferent (at best) about my birthday, I decided to try a casual join-us-for-cake gathering with a few friends. I’m not a huge fan of being the center of attention during a more formal present-opening party, so a smaller group seemed ideal. And I always love an excuse to make that delicious chocolate pumpkin cake. This time, we went for a pinkish lavender frosting instead of orange; I got these tall candles (not at all the color in the picture, by the way) and decorated the house with lavender streamers and balloons, which the Romgi kindly provided. (jr even matched the polka dot balloons. It was adorable.) Take a look: 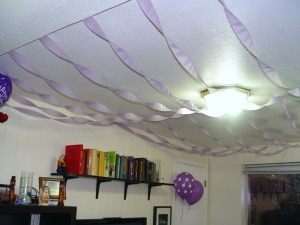 In a nod to the Bwun’s mustache party, I added a bow to my portrait: 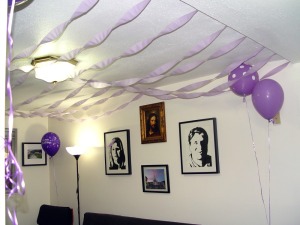 Our apartment is very oddly constructed, and the streamers stop at a 2-inch lip in the ceiling. Some old tenants stopped by last month for a stroll down memory lane, and they told the Romgi that the living room used to be a bedroom with a wall where that lip is. The wall was later knocked down, obviously, but the odd construction stayed. It kind of drives me crazy. On a different note, on the back wall you can see our newest art addition – a piece I commissioned (I sound so grownup!) from my neighbor Bridget. You can see a closeup here.

Now, about the cake. It has two layers that have to cool completely before the frosting goes on, and while that could easily be done if you had a real oven, I had to make the layers separately the night before. (I planned to leave plenty of time during the day for cleaning, but instead I cleaned all night.) The Romgi took care of the frosting and ganache; while he went to grab some dinner before dessert, I let the Bwun sit in the middle of the kitchen with the chocolate-covered spatula. Then, for whatever reason – let’s say lack of sleep leading to lack of good judgment – I went to take a picture of the balloons and streamers. When I came back into the kitchen, this is what I saw: 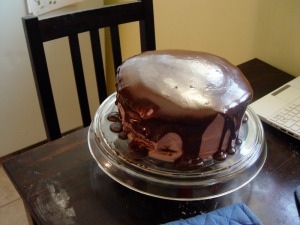 Yep, I seriously left my two-year-old in the same room as my birthday cake. After the initial shock, I decided to find it amusing. And thankfully the Bwun only got to that one side of the cake. I wish I’d thought to get a picture of the cake with candles; it looked really fun with the lights out, glowing like a real birthday cake.

You know what’s nice? The recipe only calls for 1 cup of canned pumpkin, which means I have a lot of extra pumpkin – and I’m thinking of making another cake. This one was enthusiastically eaten by our guests (and me, of course), and I might as well invite a friend or two back over while the house is still clean.

One more note…I made really cool invitations for the gathering. Recently I’ve been more and more impressed with the things I come up with. Maybe my expectations have just lowered? Regardless, I sent them all out before taking a picture, but maybe I’ll make one more just so I can show you. They were pretty spectacular, in their own small way.

I’m becoming more and more convinced that almost everything is relative. So when I say that the Bwun is wild lately, I realize that he’s calm and quiet compared to some other kids.

But compared to the 0 other two-year-olds in my house, he’s wild. And enthusiastic.

The Bwun is a big fan of the show Go Diego Go. At first, I thought it was much, much worse than Dora the Explorer, which is a horribly annoying show anyway. But since the Bwun started watching Diego, he spouts off animal facts and runs around pretending to help Diego rescue animals. When he’s in his room I hear him call, “I see a animal in trouble! We got rescue him! We need the rope!” Or sometimes he pretends that he himself is stuck: “Help! Ayudame! I stuck! Diego, I need the rope!”

I can use his new animal obsession to my advantage. For some reason recently the Bwun has decided that loud noises are scary. He used to beg me to let him use the vacuum, but now when I get it out of the closet he starts whining (if I feel kindly I would call it “whimpering”) and saying that he doesn’t like the loud scary noise. (I assume this is a normal developmental stage, since it roughly coincides with him understanding what “scary” means. But if this is something I should be worried about, let me know.) Yesterday I needed to vacuum so I asked him if the vacuum was loud like a lion or quiet like a kinkajou. He told me it was loud like a humpback whale and sat on the couch while I vacuumed – no whining!

The Bwun loves to be outside. I wish we had a fenced-in yard; keeping both the Bwun and jr out of trouble is tricky. Our neighbor got one of those old Fisher-Price kitchens and lets us use it – the Bwun calls it his “bark-a-you” (barbecue) and likes to “cook some meat” on it. He really enjoys preparing and sharing food, although his version of preparation is usually to pull imaginary foods out of the air. Or to put a cup against the wall and let the food pour in. (Think of a fridge with ice and water spouts on the front.)

Right now his two favorite songs are what he refers to as the “people go out” song and the “chim chimree” song. Can you guess what they are? The first is “John Jacob Jingleheimer Schmidt,” and the second is from Mary Poppins – “Chim Chim Cher-ee.” The Bwun will ask for either of these songs many times in a row.

I realize this update on the Bwun doesn’t quite make him sound wild. He’s a ball of energy lately, though. I promise. Anyone who wants to run from wall to wall in the living room for 10 minutes straight has too much energy. After he runs back and forth, the Bwun starts going in circles, then having me count for him to blastoff from the couch and land in a heap on the floor (about 80 times). Trust me – the Bwun is wild.

But I love him. 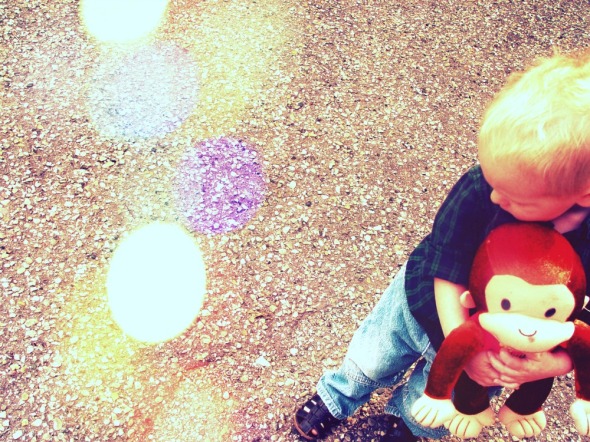 The Romgi and I got to go see the final Harry Potter movie on Friday. Yep, we actually went to the theater, on opening day! With popcorn and everything. (I feel obligated to scoff at the prices charged for snacks – a popcorn and a box of candy cost $12. If we ever go to a movie again, I’m definitely filling my purse up with our own snacks.)

When I read Book 7, I rushed through. I was really intent on reading it quickly because I wanted the whole plot at once. Interestingly, I do the same thing with my favorite meal, the Romgi’s french toast. I basically inhale it because I want the whole experience immediately. This is ok with food (except that it’s gone too soon), but doesn’t work as well with books. I’m already a fast reader. Going much faster than normal means I skim or even skip over parts that look less important. I consequently missed some of the Deathly Hallows experience. I’ll be honest, I thought it was my duty to be enthusiastic about Book 7. The Romgi didn’t love the book, but I enjoyed it and wanted to support it in all its importance. With the Romgi’s less enthusiastic response in mind, I haven’t ever re-read the book, and I was a little bit apprehensive about the movie. What if it was disappointing? Book-to-movie adaptations are always tricky, but this was to be the final movie in what might be the most influential series of my lifetime. I felt like there was a lot at stake.

So…what did I think?

Holy hannah. It was the best movie I’ve ever seen. (I make that claim without putting a whole lot of thought into what other movies I’ve seen. It’s more of an emotional statement than a rational one.) It was perfect. I thought the adaptation was amazing. As soon as the movie ended I was ready to watch it again. In fact, when we got home I picked up Book 7 to see how I like it this time. This may sound silly but I felt intensely emotionally invested in the movie, and it was a meaningful conclusion to the series.

Have you seen it? What did you think?