Day 6 and beyond: Greensboro

The Romgi made the clever observation that we had trouble finding a good price for a hotel room in Charleston, WV because it was a holiday weekend. Sure enough, on Saturday morning, the continental breakfast room was swarming with people (and, sadly, not much in the way of good food). We had only a half-day’s drive to Greensboro, so we planned to take our time getting ready in the morning and enjoy the last leg of our trip. 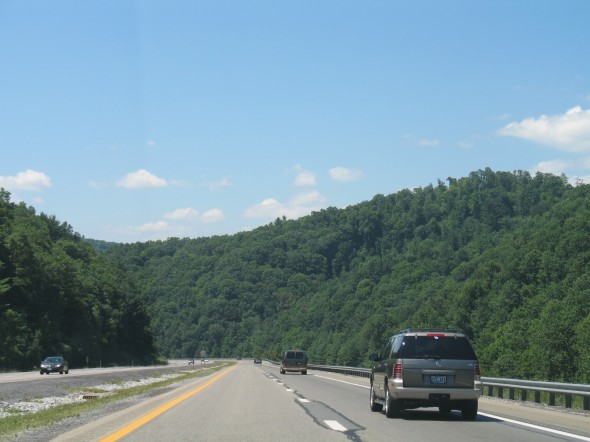 In the Romgi's words, West Virginia is "lousy with trees."

Sad news: as the passenger, it was my job on Saturday to take pictures of the state signs. Believe it or not, I did alright getting the Virginia one.

Virginia the bird welcomes you, apparently. 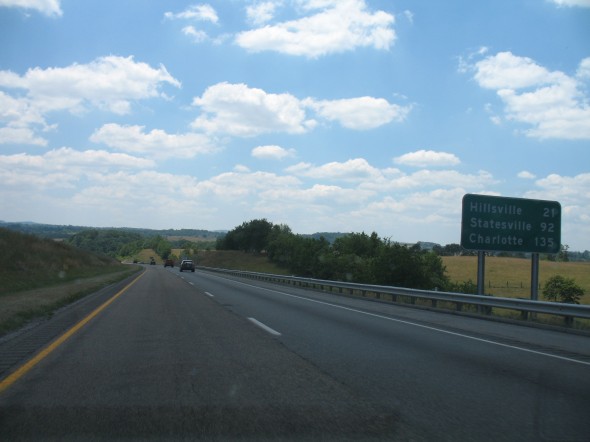 Virginia actually started to look like parts of Northern California. But maybe still with more trees.

Along the way into Greensboro, along I-77, there’s a town called Fancy Gap, VA. Here’s a story for you. I used to be a genealogy major. I think BYU might be the only place you can do that (you can become a certified genealogist, but that’s something separate from a degree). One of the classes I took required us to select a family group and focus all of our research on them. The family I chose was my 3rd-great grandmother and her children. There had been some confusion over who her husband and parents were – names were mixed up in the information I had been given. After hours and hours of research I determined that she was never married, but had five children. They lived in rural Virginia, in Carroll County, which includes Fancy Gap. When I saw the town name on our map, it reminded me of the research I’d done, and I vaguely remembered that there was a family cemetery in the area. My mom helpfully left me a message, but wouldn’t you know that cell phone reception along I-77 is almost nonexistent? So we had some fun with the GPS and some backroads. Eventually our GPS ran out of road, even though we were still on one, so we pulled up behind a truck that pulled over at a tiny little shack – which turned out to be Hugo’s Trading Post.

I went in to ask directions, and while I was in the Romgi snapped this picture.

Thank you for shopping here!

The man inside was very nice, and when I told him I was looking for the Bolt cemetery, he asked which Bolts specifically. I mentioned James Bolt (my 4th-great grandfather), to which he replied, “Who’s his kin?” I’ll be honest, the man had a heavy accent (drawl?) and I had to ask him to repeat the question. Luckily I have some slight hearing loss from my ear infections and I can use that as a handy excuse for making people speak more clearly and slowly. He did know who we were talking about, and gave us pretty good directions to the “main road” and from there to the Spence cemetery, where James Bolt is buried.

Before long we got to the main road, the bustling city center of Laurel Fork, VA. 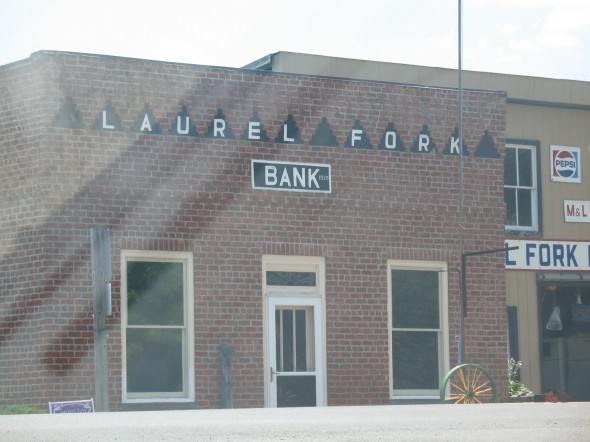 We actually turned around so we could get a picture of this. It's just SO QUAINT. 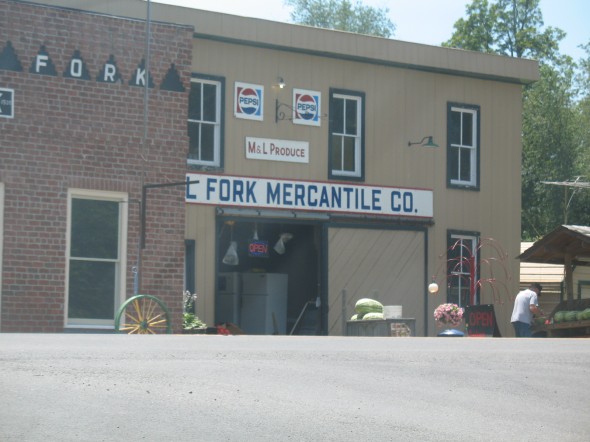 Anyway, the man seemed to have overestimated how far it was from the main road to the cemetery, and since I knew there were quite a few family cemeteries in the area, I think we passed by. I saw one on the left but it was much sooner than expected, so we just kept going. But since Laurel Fork is only about two hours from Greensboro, we’ll take a trip back one of the weekends we’re here.

Oh yeah, we had to make a pit stop at a gas station a few miles later. I want you to take a look at this.

I don't know about where you live, but our gas pumps back home look a little more modern than that.

So, remember what I said about me being in charge of the state sign pictures? 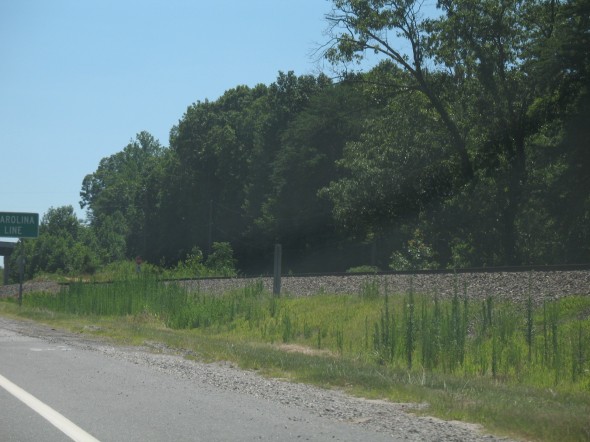 There. All the way on the left. "Arolina Line."

There! Welcome to North Carolina!

We were able to make it into Greensboro and get settled into our apartment. It’s a fairly decent size, and while it may not be in a fabulous part of town, we’re paying about the same as our rent back home. Would you like a tour? 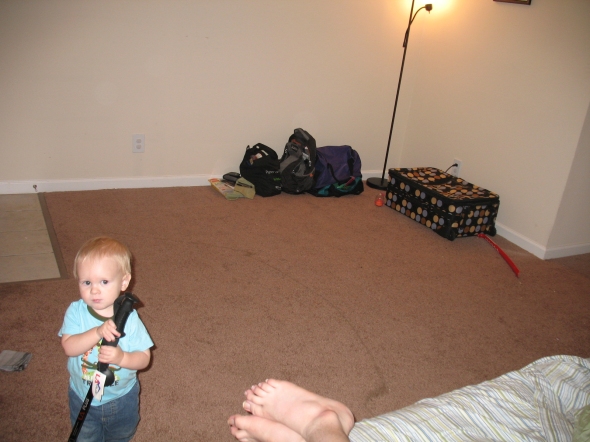 There's no overhead light in the living room, so we had to get a cheap Walmart floor lamp. It's amazing what a difference that makes over just turning on the hall light (which was burned out when we got here). The Bwun is carrying a walking stick that the Romgi got in Korea. The Romgi is chilling on the air mattress.

View from the living room. You wouldn't think it possible, but the kitchen is even smaller here than ours is at home.

Alright, I took a break from cleaning to take pictures, but I did get the dishes clean after this. I just want to point out that the sink, though full, is stainless steel. I really hate the ceramic one in our regular apartment. I can't ever get it clean clean clean, no matter how much I bleach or scrub it. But the best part of the kitchen?

AN OVEN! I especially liked having multiple burners, except it turns out I infinitely prefer a gas range. And I don't cook as well with electric. Sorry, universe.

All the light switches are like this. I don't know if it's a North Carolina/East Coast thing or just the apartment complex, but it's a lot easier for the Bwun to switch on and off. I guess that's the important thing, right?

We let the Bwun have the bedroom, mostly so we could shut him away when it was bedtime. We also let him run around and get all his toys out. This was the resulting mess, which seems fair after being in the car for a whole week.

The bedroom has a washer and dryer tucked away in a little closet, and can I say how glad I am that we don't have to go to a shady laundromat to do our laundry?

Both the bedroom and the living room have these air conditioners. The settings range from LOW HEAT to HIGH COOL, and although it does a great job of keeping the apartment cool (for free! to us, that is), there's very little difference between low and high. This matters because I'm tired of having constant loud noise. But, no sense in complaining. Better noise than heat.

And now – what have we been up to besides hanging out in our apartment?

The Romgi has been at work.

I’ve been looking after the Bwun. 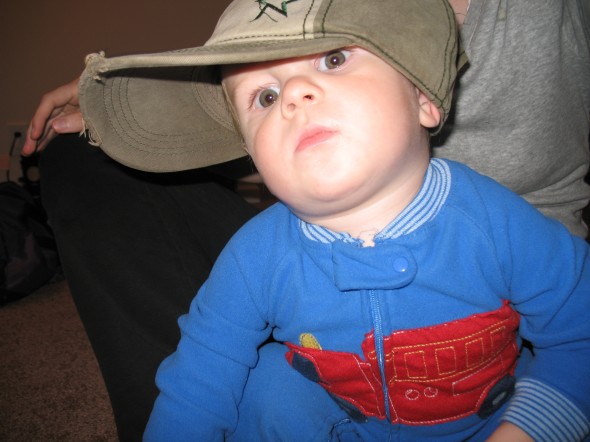 ...He's been working on his image.

I think the hat works!

I’ve read two books since we got here (Dracula by Bram Stoker and Masterpiece by Elise Broach), so I’ll post reviews soon. In the meantime, I hope you enjoyed my quirky storytelling and terrible picture-taking!