Our plan for Wednesday was to spend an hour or two at the Rolling Hills Wildlife Adventure and then drive to St Louis (about 7 hours from Salina). I’m glad we decided to do that instead of trying the zoo on Tuesday afternoon, because even in the morning it was plenty hot. Luckily the zoo itself is extremely well-maintained and has plenty of shady trees and benches. Seriously, this place is in the middle of nowhere, but they must have amazing funding, because the animals were obviously well-cared for and the grounds were in spectacular condition. Something to be said for private funding, eh?

So! Let’s see some animals. 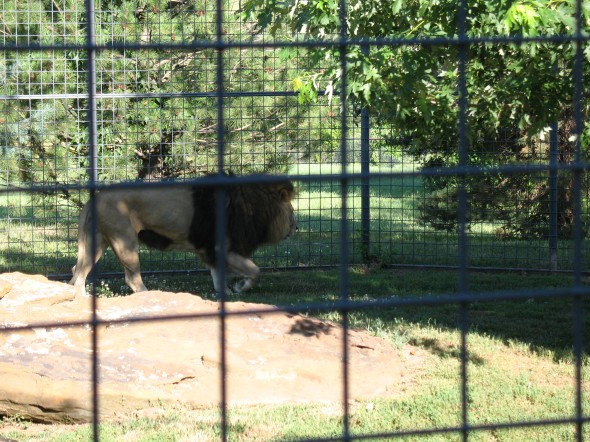 A lion (two, actually). This guy was just purring, but it was LOUD! The Bwun was suprisingly uninterested, which isn't really a good thing for the second animal you see at the zoo.

Ring-tailed lemurs. You can at least see one in the picture, right? 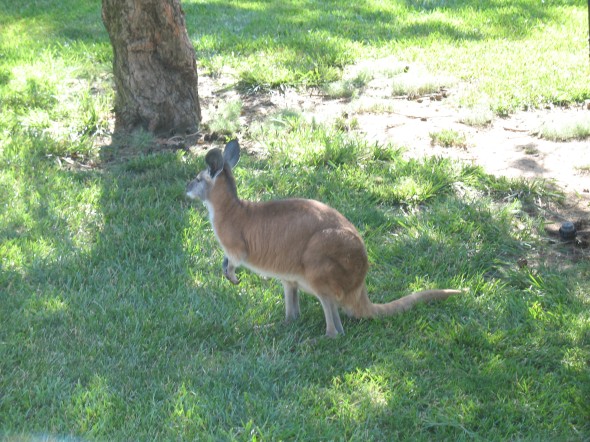 A wallaroo (wallaby-kangaroo mix). I loved seeing him hop around.

A rhinoceros. These guys are BIG. 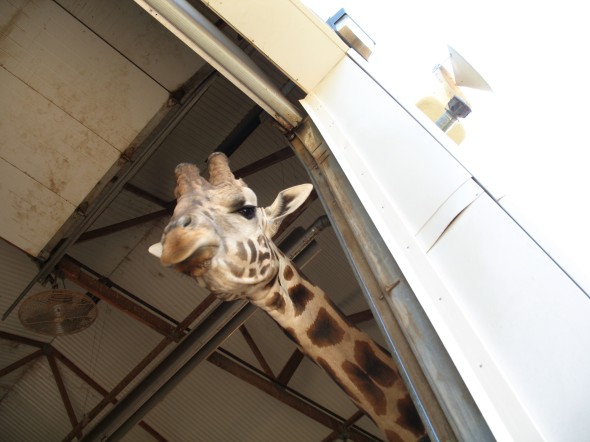 A giraffe. The Romgi was able to get his attention for this shot.

An orangutan. This was by far the Bwun's favorite - just sitting up against the glass eating some lettuce!

A cougar. You'll have to look closely on the right side, in the glare. Also note you can just barely see the Oeuf making a bump. P.S. My hair is not really that color orange.

Flamingos! Glad to see them perched so flamingo-ly.

The flamingos were our first and last stop at the zoo. It was a really great place, and I enjoyed getting to see so many fun animals in the middle of Kansas. Good start to the day.

Then we headed off for Missouri.

I took this great picture of the Kansas City skyline before the Romgi pointed out that now the camera's memory card was full and I wouldn't have time to delete anything before I missed taking a picture of the Welcome to Missouri sign. Oops.

Good thing the Romgi loves me a lot and was willing to stop at the Welcome Center to take a replacement picture, since I kind of missed the real sign...

You know what I’d like to tell you? That the rest of our day was uneventful. Partially true: we made it into St Louis without trouble; we got checked into our hotel room, which had a kitchenette and the Food Network; we had take-out from a Tex-Mex restaurant similar to Chevy’s; another hotel guest burnt their dinner and the fire alarm went off; several fire trucks came.

The lights on the fire truck were much, much brighter than I would have guessed. 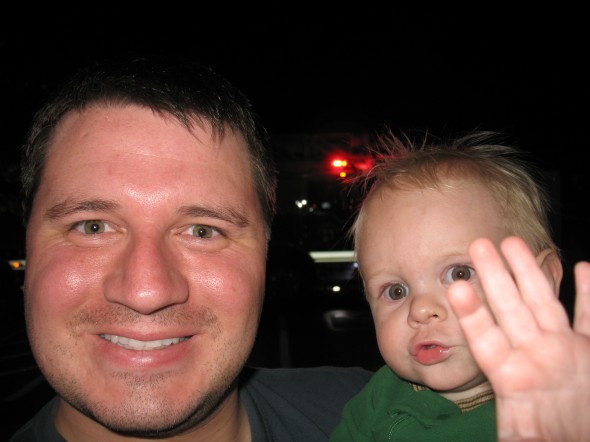 The Romgi and the Bwun made an adventure out of it as only optimistic people can. I stood off in the distance being grumpy.

At last the fire trucks went away and we got to go back inside. The Bwun had a hard time falling asleep, and when I’d reached my limit of hearing him scream and cry, I got him out of the crib and had him come lay down with me. I rubbed his back for about 90 seconds before he fell asleep. After that he promptly twisted and turned so that my choices were to fall off the bed or to go sleep on the couch. I picked the couch. Not my favorite night! 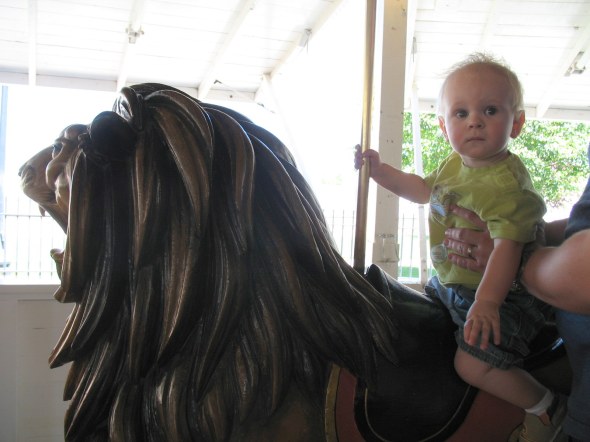 The Bwun became more and more uncertain as the ride went on.

...while the Romgi took over the lion.

Sorry for the bad lighting, but this is the view from my seat inside the carousel. 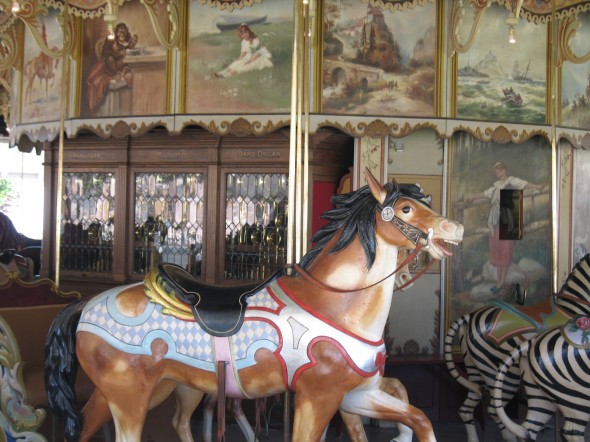 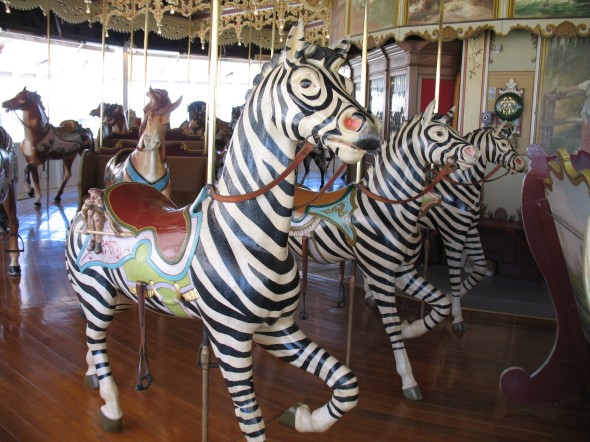 After our ride, we ate lunch in a little gazebo near the carousel. I think the town of Burlington, CO turned out to be a great stop for us! It wasn’t far from the state border, so before too long we saw… 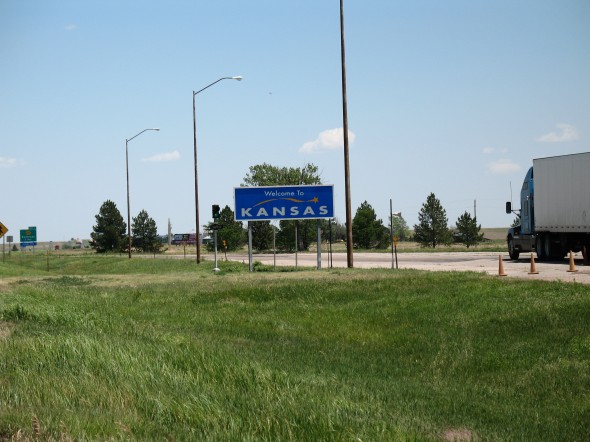 This is what most of Kansas looked like, except flat. I think the camera angle adds a lot of interest.

We kept seeing signs on the side of the road for “SIX-LEGGED STEER” and “WORLD’S LARGEST PRAIRIE DOG.” There were a lot of other animals listed, but wouldn’t you be sold just on those? I was, so we stopped in Oakley to visit Prairie Dog Town.

The Romgi knew when we pulled up that it might not be as cool as advertised. 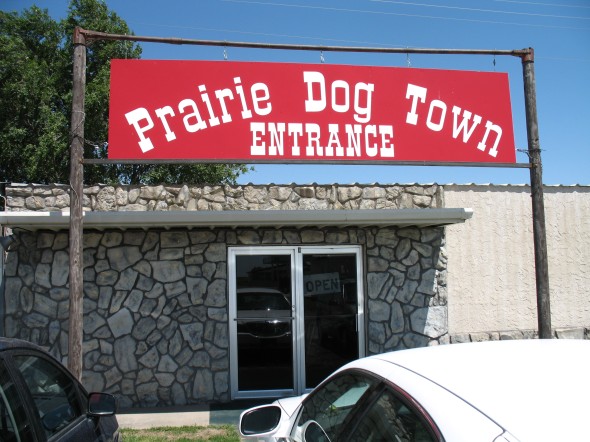 Warning! May be disappointing inside.

We walked into a dingy gift shop smelling strongly of formaldehyde. To go see the critters cost us $8 apiece (the Bwun got in free), which made it more expensive than all of our adventures in Burlington combined. How could it possibly be worth it? The cashier told us to go out the back door – so we basically went out into the hot sun to see someone’s collection of farm animals. Stinky farm animals.

But there were some surprising animals, it’s true.

A six-legged AND a five-legged cow. 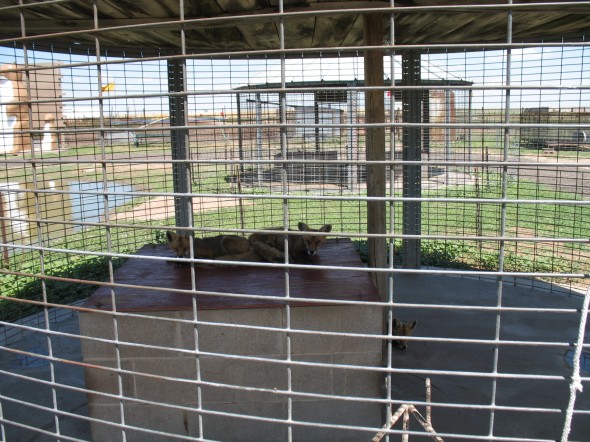 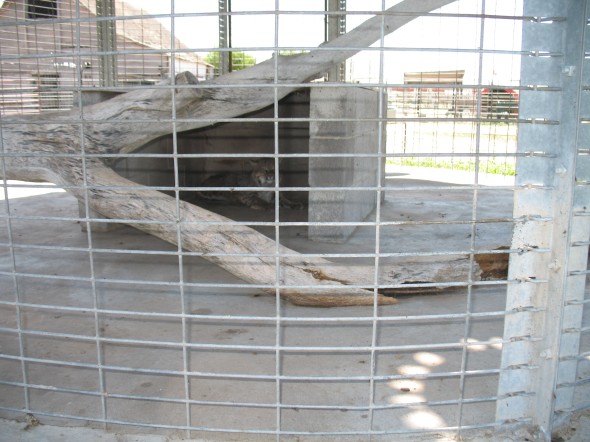 My personal favorite, a badger.

And, of course, prairie dogs. Did you know they chirp?

As for the “world’s largest prairie dog,” it was just a big fake cardboard thing. Laaaaaaame. We looked around the stinky gift shop when we were done, but most of the gifts involved bathroom humor. If we hadn’t gotten to see a badger, I probably would have called it a complete and utter waste of money. Because of the badger, though, it was just mostly a waste of money.

Not much else to say about our drive through more of Kansas. We stayed overnight in Salina, and although our hotel room cost about double the price of the Motel 6 in Denver, we got a very comfortable king-sized bed, a spider-free room, and best of all, the Food Network. And HGTV. We need a cable package at home that just includes those two channels, and we’d be set! For dinner we ate at a local Italian restaurant that was well-reviewed. It was impressive: baked ravioli appetizer (one of my favorites) was almost a meal in itself, the Bwun’s spaghetti and giant meatball (at least half the size of his head) was a big hit, the waitress graciously took my dish back when it came out covered in shredded cheese (ok for some things, but not what I wanted on my tilapia and linguini with vegetables), and the service was excellent. Who knew you had to go to Kansas for all that?

I’d like to say we called it an early night, but the Bwun wandered around for a few hours while we watched the Food Network. (Alton Brown was on. Can you really blame us?) Fortunately, the Bwun fell asleep quickly once we finally put him down, and he slept the whole night in his crib – which meant no one else had to give up their spot on the comfy bed. Hooray!