I’ve waited a long time to read this second book in the Abhorsen trilogy (the first being Sabriel). In fact, it’s been almost a year since I read Sabriel.

Because it has been such a long time, I was worried that I wouldn’t remember enough of the storyline to follow along. Nix does a wonderful job of keeping the reader up-to-speed, reintroducing important themes and characters.

This book follows Lirael, a young woman born to the Clayr, the women of the bloodline who are able to See the future. By age 14, Lirael has still not received the Sight which comes to most Clayr years earlier, and she feels left out – not only by her lack of Sight but by her appearance, distinctly different from the other Clayr. The first half of the book is about Lirael finding her place and growing in her power.

Thank you, middle book in a trilogy. There was absolutely no conclusion, no resolution, and no sense of ending. While I absolutely loved Lirael, it was only half a book. Sabriel stood on its own, but there is no way I can say that Lirael is worth reading without having the final book (Abhorsen) standing by. Unfortunately, I don’t have it, and my plan is to read all 26 of my books for this year before moving on to any others. That means I still have 21 books in my way before I’ll read Abhorsen.

By all means, read Sabriel and then Lirael, but make sure you have immediate access to Abhorsen as well.

In the words of Tracy Jordan, “Twist!”

Have you ever watched Ocean’s 12? That’s the one where they try to steal the egg, remember? At the end we find out they had successfully stolen it a while back. The Thief has a similar end-of-story plot twist with little, if any, foreshadowing.

Up until the final chapter, I enjoyed The Thief. The characters were interesting and fairly well-developed, the plot was captivating, and I wanted to know what happened next.

The problem was that the book was told in first person, and we were never given any indication that the narrator was not who he claimed to be until the last pages of the story. Suddenly the entire book was explained as being a giant plot twist. I can think of only one instance where the narrator said something that hinted he might have a different identity. Since Amazon says The Thief is intended for readers age 9-12, I doubt that most readers were able to piece together the true story from such lacking foreshadowing. It just wasn’t any fun to find out at the end that the plot was half-hidden.

The writing is good, and, as I said, the story is interesting, but I wasn’t impressed with the Ocean’s 12-esque ending. Maybe kids age 9-12 will enjoy?

The Forest of Hands and Teeth 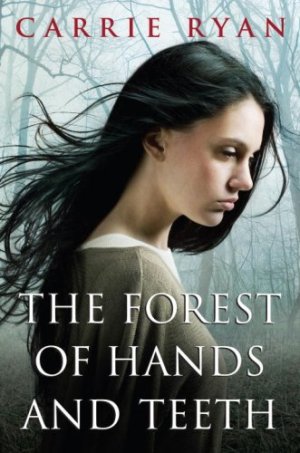 Would you like to read a book about zombies?

This isn’t the one to read.

The Forest of Hands and Teeth is about a post-apocalyptic village (with a Middle Ages feel) completely surrounded by fences to keep out the Unconsecrated (read: zombies). The Unconsecrated are those who have been infected, briefly died, and then returned as living dead whose only drive is to eat flesh.

The main character, Mary, believes the stories her mother told her, passed down through generations, about the ocean. A beautiful, enormous stretch of water where there are no Unconsecrated. Throughout the heartbreak and tragedy of her younger years, Mary wonders if the ocean really does exist, but is forced to accept the reality that her village contains the only survivors in the world and they must stay where they are.

I hope you don’t mind if I spoil the plot a little. If you do, skip ahead a bit.

Love triangle (rhombus?), death, nuns, a visitor from outside. Mary learns – although it is kept secret by the nuns – that there are other survivors when a girl about her age arrives from another village. She is not infected, but the nuns lock her up. Mary is a sneaky, too-curious-for-her-own-good young woman who talks to the girl (Gabrielle) and decides to investigate. More love rhombus, more love rhombus, more nuns; in the midst of a love rhombus scene, Mary sees Gabrielle on the other side of the fence protecting the village – Gabrielle is now one of the Unconsecrated, and she’s fast, unlike the other zombies who are slow and clumsy. After more too-curious-for-her-own-good investigation, Mary learns that the nuns released Gabrielle into the forest because they knew it would make her into a superzombie.

The next day, the village is attacked! Gabrielle has figured out a way to get in, because she’s a smart superzombie. Mary, her fiance Harry, her love interest Travis (Harry’s brother), and Travis’ fiancee Cassandra (Mary’s best friend) all manage to escape through a protected path leading out of the village. So do Mary’s brother Jed and his wife. Oh, and a little boy they grabbed along the way.

Big spoiler: everyone in the village dies.

Alright. So Mary and her friends are trying to survive. That’s the point of the book. Unfortunately, Mary is one of the most annoying characters ever written.

At the beginning of the book, she decides she’ll be happy if she could just go to the Harvest Festival (prom?) with Travis, but gets asked by Harry. Then no one ends up taking her, and she just wants to be spoken for. By Harry, sure. Then she falls in love with Travis and is heartbroken because she can’t be with him. Harry speaks for Mary. She has a talk with Travis. She decides that all she needs to be happy is to be with Travis.

Then once they’re trying to survive, and she has Travis, more or less, she decides that all she needs to be happy is to find the village Gabrielle came from. They finally find it, and now she has a nice cozy house for just her and Travis. But soon she finds another reason to be unhappy: the woman whose house they’re living in is most likely one of the Unconsecrated milling around outside, but what if she has managed to escape and she’s in some other village and no one will remember her story? What if no one remembers Mary’s story? Travis reassures her that he’ll remember, he’ll be part of her story. This is not good enough.

Mary sulks. And sulks. And eventually decides that what she needs to be happy is to find the ocean.

That’s right – she got the guy, and the happy life, and she started actively looking for more reasons to be dissatisfied. She just doesn’t want to be content. Did I mention I really can’t stand Mary? She’s willing to sacrifice everyone she loves – and to make them sacrifice themselves – for the sake of the ocean. Another spoiler: she gets to the ocean, and there are still zombies.

Aside from Mary’s character flaws (which are numerous), I had too many unanswered questions about the plot. Why did the nuns release Gabrielle into the forest? This, to me, was a gaping hole that absolutely required filling in. It seems utterly lazy of the author to have brought it up once and never addressed it again. I would have liked to hear a little more about the origins of the Unconsecrated, since there was plenty of downtime with Mary sitting reading old newspapers. (Yes, it was boring.)

Bottom line, this book was too much Mary and not enough zombies.