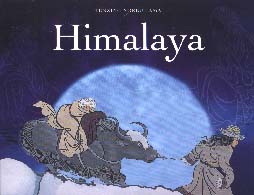 Some of the picture books I read were randomly grabbed off the shelf; others caught my eye because of the title or illustrations. Norbu’s artwork is stunning. The paintings are extremely detailed but have strong, bold lines (just the kind I like!). Quite honestly, the story bored me a little bit – it tells of a young boy named Tsering who must take command of his village when his father unexpectedly dies. I wish I had read the endnotes first; it turns out the author is actually part of the people described in the book, the Dolpo-pa. They live in Nepal and grow barley and raise yaks. Once a year they travel to Tibet to collect rock salt and then caravan to central Nepal to trade the salt for more barley. The endnote also says that Norbu’s paintings for the book are almost 26 feet long. I assume that’s the total measurement, but even so – massive! I really think you should find a copy of Himalaya, for the artwork alone.

Night Thunder and the Queen of the Wild Horses 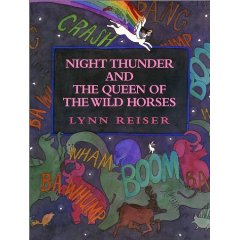 {written and illustrated} by Lynn Reiser

A little girl paints a picture of a somewhat freaky winged-horse-queen (think the weird cover of some A Wrinkle in Time books) before going to bed. During the night the girl and the queen both wake up because there are loud noises outside. They can’t go back to sleep because it’s so noisy, so they decide to go see what’s making the noise. With excellent repetition, they encounter several different groups of creatures who are fussing because they’re tired and can’t sleep due to the noise…until finally it turns out a rabbit was the original noisemaker, and he’s thumping to stay awake because everyone else is awake. The illustrations are watercolor and have a very unique style. I personally prefer much bolder drawings, but Reiser has such an interesting approach to the story that I found myself enjoying looking at the pictures – something some picture books sadly don’t make me do. 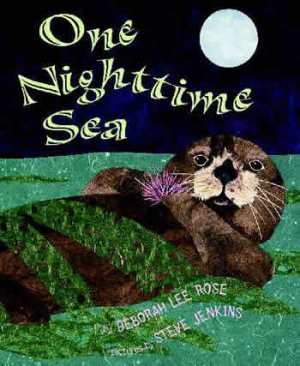 A counting book goes from 1 to 10 and back down, showing detailed and colorful cutouts of marine creatures. My favorite was the seven masked butterfly fish. I think this is a great bedtime book for little kids, and older kids will enjoy the appendix – the author includes information on each of the animals shown in the book. Two complaints: first, since each animal is spread across two pages, the book starts on the left-hand side, which caught me off guard; second, the fonts are hideous. Small details, I know, but in a picture book I feel like presentation is everything. Right?

{written and illustrated} by Chris Raschka

I have to say, not a lot of people I know would enjoy this illustration style. Vague shapes of paint have black outlines to form the titular character, Waffle. Most pages also have swirls-of-paint bouncing faces that don’t really have much to do with what little plot there is. Still – it was quite interesting, and I was surprised to find that I might actually buy a copy someday. Different can be good! 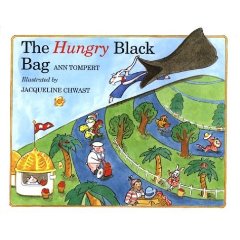 On market day, Ole Goat of Grede Mountain takes his black bag and bullies the other animals into giving him their wares – from a wheelbarrow full of flowers to gardening tools. The watercolor illustrations are well done, and Tompert has Ole Goat repeat the same phrase to each animal (“Give me your [wares] or I’ll pitch you down the mountain with my bony, bony head.”) – and I’ve found that repetition is a lot of fun for kids who are old enough to remember the words. I was disappointed, though, that the moral of the story isn’t anything along the lines of “don’t put up with bullying” or “find help” but rather “give in to a bully and hope that eventually, someone bigger than the bully will teach him a lesson.” Does it mean I’m a parent now if I start looking for the moral and trying to decide if I agree with it? 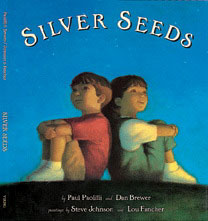 Really? It took four people to make this book? Anyway, I can’t think of the word right now…surely there is a word for it…the authors took a word like “tree” or “clouds” and then made a sentence using the letters in the word. Yes, I’m sure you’re confused. Let me give you an example:

folds and folds
of spun sugar, like a soft
gray blanket over the land.

Yes, that’s for fog. Some of the other pages were a little bit too “poetic” for my tastes, but I did like the fog poem. There are plenty of adjectives, though, that I think will help kids learn to make comparisons. The illustrations are nothing special. I mean, of course they’re far better than I could ever dream of doing, but the style didn’t captivate me. I think they’re done with pastels. I can actually see this being a good bedtime book, since it might help kids wind down. In case you’re wondering, silver seeds = stars. 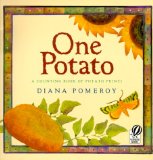 {written and illustrated} by Diana Pomeroy

Another counting book, illustrated completely with potato prints. You know, where you cut a shape in a potato and use it as a stamp. Meh. Colors are too dull. I did like that the counting continued from 10 to 20, 30, 40, 50, and 100 (sunflower seeds).

Gila Monsters Meet You at the Airport 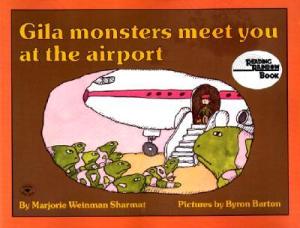 Ok, it is obvious that I picked this one because of the title. Gila monsters? At the airport? The book is about a boy whose family is moving from NYC to “out West.” He gives a long list of reasons why he’ll hate it there, all of which are hilarious misconceptions about what the West is like. My favorite: “Out West I probably won’t have any friends, but if I do, they’ll be named Tex or Slim, and we’ll eat chili and beans for breakfast. And lunch. And dinner.” Once the boy arrives in the airport, he meets a kid whose family is moving back East. The kid explains why it will be horrible: “In the East it snows and blows all the time, except for five minutes when it’s spring and summer.” By the end, of course, the boy who moved West discovers that it isn’t that bad. I thoroughly disliked the illustrations, but the book was so fun that I’d buy it anyway.

{written and illustrated} by Esphyr Slobodkina

Bright, bold, modern art in a story about a farmer who gives his horse a heaping bucket of wheat for breakfast. After the horse has its fill, a goat, a hen and her chicks, a mouse, and an ant each take their turn; all of them remark what a “wonderful feast” it will be, despite the decreasing size of the servings. Interestingly enough, I rejected the book’s moral (whatever it was), and just decided I loved the artwork. Much different from Caps for Sale, and much better. 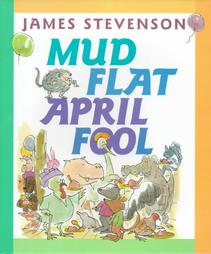 {written and illustrated} by James Stevenson

Apparently this is part of a set of books about the creatures living in Mud Flat. They take turns playing April Fool’s jokes on each other here. Some of them were awfully funny. And the drawings are great. A little bit pastel, but with bold enough outlines that I enjoyed them. The animals are cute. Unfortunately, the book lacked any sort of cohesion between the different sections. There was nothing linking everything together. Sorry, but I’m going to vote this one out. 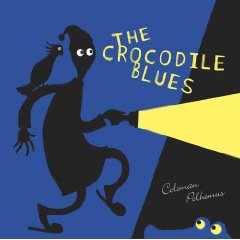 I specifically saved this for last because it was my favorite. No words are needed in this absolutely fabulous book about a man who buys an egg that hatches into a crocodile. The man escapes with his pet cockatoo and moves out of his apartment, only to get an invitation later to come back to what is now a chic club run by the crocodile. Some pages folded open to 3 pages (up or down) to show an extended scene or the tall apartment building. Honestly, I was a little confused by what order the foldout pages were supposed to be “read” in, but it didn’t detract from the story too much. The entire book is done in black, white, gray, blue, and yellow, with most images as silhouettes. Seriously. Gorgeous artwork. I love it!