So, there is something I have noticed. Roni and I worry about very different things happening to the bwun. I think I have an example that perfectly illustrates the difference.

The night after the bwun was born, Roni and I both had dreams about the bwun where something went wrong. I’ll only go through my dream here, but if Roni wants, she can leave her dream in the comments (I don’t think I’d do her dream justice by me telling it). Here it is:

It is the day after the bwun was born, and it is still morning. Some of my family members are over to visit; they have come to see the bwun. Mika calls for the nurse, and asks that they bring the baby in from the nursery.

Everybody is really excited to see him for the first time. When the bring him in, the bwun is no longer the bwun. Somehow, he has turned into an iguana, diaper and all. 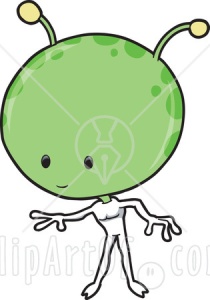 The problem is that I am the only one who seems to have noticed! Everybody else is just going off about how cute he is, and how he looks just like us.

Finally I say something, “Guys, something is wrong here! He’s turned into an iguana!” Everybody just looks at me all crazy, like they are thinking “of course he looks like an iguana.” Then Roni scoops him up and coos in a high pitched baby voice, “but isn’t he the cutest little iguana ever?”

Crazy, right? I woke up just after that. I guess you could say that I worry about things that aren’t really possible.

What exactly is the plural form of “news”?

A couple of good things to announce here, I will go down in the order of perceived “goodness”

As I am sure many of you already know, and have read of my lovely wife’s blog, we had the bwun! Here are all the juicy (do you catch that? because labor is messy… and juicy… so it is funny because… never mind) details that not even Roni probably remembers!

We arrived at the hospital around 6 AM (still a horrible time to be arriving anywhere, if you ask me), and they got Roni all set up to be induced. They started giving her the pitocin to get the contractions going. Roni has been having pretty consistent contractions for a while now, so the pitocin wasn’t really doing much as far as we could tell.

The fun really started at 9, when the doctor came in and determined that Roni was far enough along to get her water broken (is it really her water, or is the the bwun’s water that got broken?). After that, the contractions really started going, and Roni could tell that they were really doing something.

The nurse came back in around 10, and said that nothing much had changed, and shortly after that, the contractions got REALLY bad. By the time they checked her an hour later, she was fully effaced and dialated, and said that she was ready to start pushing, but that we had to wait for the doctor to get there around noon.

Around noon, a nurse came in and said that the doctor would be in soon, and Roni should start trying to push. After one push (not even one contraction), the bwun’s head almost starting coming out, so the nurse decided NO MORE PUSHING, at least until the doctor came in. We waited almost another hour, and around 12:45 the doctor made it in.

When he entered the room, they started having Roni push again, and by the time the doctor had his gown on, it only took one and a half contractions for the bwun to enter the world! At 1:09 we officially had our newest addition to the family. Evan Tarleton was born at 7 lbs and 5 oz kicking and screaming. I thought he was cute right off the bat, but Roni reserved judgement until he was washed off to make her call. Personally, I think he is getting cuter by the day. Check out Roni’s blog about the bwun to see pictures of the cute little guy.

The other good news?

Well, my interview with BYU went quite well. I thought it was going to be a very in depth interview with all sorts of trick questions. I was surprised, however, because it was fairly straight forward. The dean asked why I wanted to go to law school at BYU, and then he told me why he wanted me to go to law school at BYU. So hopefully, I’ll be going to BYU in the fall to start my legal education!

Click here to read about Tarlton Lewis, my 4th-great grandfather.

What? You just want to see the Bwun?

We're both kind of tired. 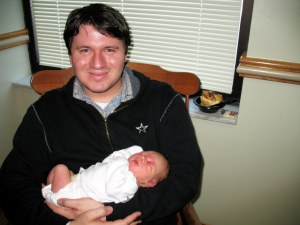 So, so fabulous the Romgi and Bwun. 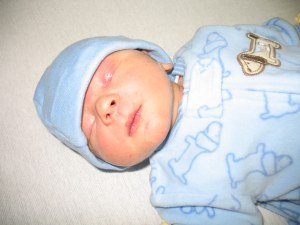 Everyone is doing well. We like the Bwun so much that we’re thinking of keeping him. Huzzah for babies! Huzzah for the Bwun!