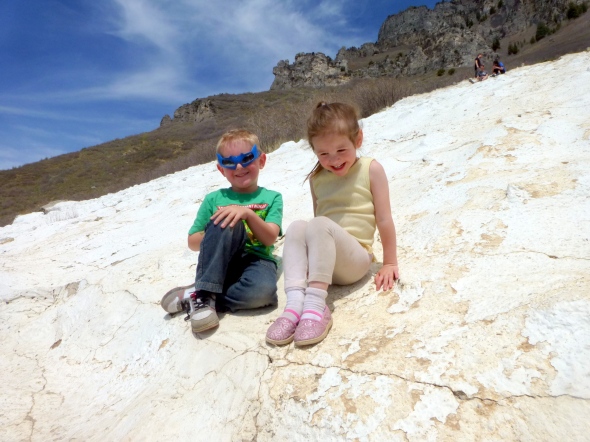 Evan has learned what “I’m bored” means. Oh heavens. Since I’m not a particularly I-want-to-play-all-the-time kind of mom, my brain isn’t full of constructive ideas for projects and activities that he can do. Mostly he plays with his best friend Cooper, who is also 5, who lives 3 houses down, who is unfortunately moving at the end of this month. What are we going to do then?! Cooper has a fenced backyard with a swingset. It’s been so nice to just let my kids go over and play without worrying, since we have neither a backyard nor a fence at our house. And given that Cooper will be moving so soon, I don’t mind letting Evan play as much as he wants. It must be hard to have your best friend move at that age.

The school year is ending in a few weeks, so I do have some tentative plans for summer projects and fun things to do. Otherwise I’ll just replace Evan with a recording of “Mama, I’m boooooooored” and me with a recording of “Did you clean your room yet?” Evan has loved preschool, more or less. There have been some big battles with getting him to agree to wear clothes (instead of pajamas or swim trunks) to school, and he’s refused to go at least twice – because of said battles. But when he does go, he has a blast. His teacher is great, and although Cooper is in his class, Evan has made new friends too.

He’s a solid sleeper. He gave up napping at 18 months, but traded it for consistent 12-hour nights. Deal! Evan usually wakes up on his own rested and happy in the morning. He falls asleep easily at bedtime, too, which is a huge blessing.

June, however, would probably rather not sleep at all. Ever. She’s gotten better recently, but for a while she’d stay awake in bed until 10 or 11 every night – and still get up with Evan in the morning. And not nap.

She has picked up quite a few bad habits from Evan, things that we’ve been working on with him and haven’t quite resolved yet. Most notably: anger. Okay, so this is my fault. Really. I have a bad temper and I have gotten so much better over the past year, but sometimes I still just – it’s so frustrating – why won’t they just listen to me! You know what it’s like, right? Anyway, there was a month or two where Evan would try threatening me if he didn’t like what I said. Things like “If you don’t let me eat a cookie, I’ll take your pillowcase off of your pillow and hide it in my room!” (He wasn’t very good at threats. At first.) He’s gotten past it, but toward the end it turned into “Just let me have a cookie and I’ll be nice” which to me is just a turned-around version of his earlier threats. Now June says stuff like that all the time, in a very angry June voice. With a very angry June face. I’m working on correcting this behavior . . . but it’s a lot harder when her angry face and voice are so amusing.

Aside from that, June is constantly playing ponies. She has an extensive collection of toy ponies, both My Little versions and realistic ones, and has (on more than one occasion) introduced herself to someone as Starlite. More often than not she is pretending to be a pony. When we’re driving somewhere and see horses, she shouts, “LOOK PONIES! Can I ride them?” I personally don’t understand this obsession as I was never into horses; Jarom says it’s a typical little girl thing. Huh.

One of the things I like most about June is how independent she is (when she’s comfortable). Even as a baby, she’d wander off into another room by herself. She, unlike Evan, is never bored; she makes up games and finds things to do on her own. When Evan goes to school I basically have free time because June wants to play alone. It’s pretty nice. And I’m sure it’s good for her creativity or something. Yeah?

Oh, and she sings. A lot. Jarom and I noticed from the time June started talking that she memorizes songs (both words and melody) very quickly. She learned the alphabet way before Evan because she knew the song. I love hearing her make up songs in her room, usually about ponies and dinosaurs. Together.

I decided not to put June in preschool this fall. After talking with Evan’s teacher, I’m going to try having her do preschool next year (when she’s turning 5) and then skipping to first grade the following year. If she did preschool this year, she’d be in the 3-year-old class, which is a very . . . um . . . well, I don’t think it would benefit June much. As much as I’d like to have a few hours every week by myself, I’m glad to keep her home with me for another year.

Because look at her!

And Christian is still dead, so no updates there.

Jarom and I were talking last night about how our parenting has changed – or how we wish it would change – since Christian died. We want to be more loving toward Evan and June, to make sure they know how much we love them, just as we wanted Christian to be loved.

Maybe I’m short on maternal instincts or perhaps (definitely) patience, but kids are frustrating! And difficult! And challenging! It’s hard for me to feel compassionate and loving when June calls me back into her room at 11:00, 11:03, 11:08, because she wants pink milk and then it wasn’t pink enough and then she’s terrified of monsters and then she wants more smooches. (Post coming soon about our challenges with June’s intense fear of the dark.) Why isn’t she asleep at that time of night? It’s even more aggravating when I know we’ll be doing the whole routine over again at 4:00 am.

Or I could talk about Evan’s breakdowns when I ask him to clean. If I even say the word “clean,” he immediately starts whining and nearing tears – “But I haaaaaaate cleaning!” I’ve tried a lot of approaches, none of which are very successful: explaining that everyone hates cleaning, even me, but it’s part of my job and his job; saying that cleaning is a lot more fun, or at least less bad, when we do it together; rewards for when he does pick things up; asking him to put away just five things – they’re all met with “But I don’t want to clean!”

I admit, there have been a few times when I try to explain that we don’t always get what we want and I didn’t want Christian to die and hey, Evan, you just NEED TO CLEAN even if you don’t want to. That’s life.

But there are subtle changes. I am gradually becoming just a little more patient and a little more willing to understand things from my kids’ point of view. If I have to sit in Evan’s room and instruct him to pick up one item at a time and then tell him where to put it, maybe that will be better for all of us than me losing my temper and Evan sobbing and wailing about how terrible cleaning is. Maybe Evan and June are subconsciously trying to make up for the fussing Christian will never do. When June spends the better part of an hour screaming because she wants Tinkerbell underwear (how dare I put anything else in her closet), maybe I can remind myself that although it is a minor – and ridiculous – issue to me, June’s world is crashing down. Maybe a little sympathy?

And there are so many good moments. Lately Evan and June both love telling me I’m a donkey so I’ll make donkey sounds, or trying to make me fake cry because they think it’s hilarious. Right now we’re at the play area (don’t judge) and Evan is crawling around pretending to be a dog, with five other kids copying him. June is making a dinosaur eat my face. Or kiss me, I’m not sure which. Evan went on a drive up the canyon with Jarom’s grandma and declared that the fall colors made it Rainbow Mountain. He also insists on wearing his new Batman pajamas day and night. I’ve put my foot down about him wearing them to preschool, but everywhere else he’s mostly admired for his wardrobe choice. I suppose four-year-olds can get away with it.

I’m trying to be patient with myself as I work at being a better parent. Again, easier said than done. But I think – I hope – I’m on the right path.

I’ve written before about how much I love some of the words Evan and June mispronounce. I correct most words, but there are a few I leave alone. If you didn’t catch my earlier post about it (maybe it was on Facebook?) I’ll recap my favorite words, and then I have a few new ones to add…

Recently June has been asking to watch Ploo (which I finally figured out was Blue’s Clues) and pretending to be an eagle. And eagles, according to June, say “SEEG!” quite loudly. And shrilly. Is shrilly a word? I tried to get her to say “btw” (you know, bee tee dubs) and she amused herself by saying “POOP dee dee dumbs!” Oh, June.

Evan is doing interesting things in learning how tenses work. The other day he told me he had “tookened” something (instead of taken). I did correct that, but only after telling him that was a good job trying to use the word.

My absolute favorite, by far, is one June has mostly stopped using: chicklips for chapstick. Love!