When we moved, I bought a large IKEA Expedit bookcase for the living room. I’ve seen a lot of interior design blogs about “styling” your bookcase and here’s what I have to say: I don’t have knickknacks to display, I have books – hence the bookcase.

So mine is just filled with books. I am ok with that.

I love having all the books right on display – in our basement apartment, I had one shelf in the living room (with the books arranged by color), and four shelves in the bedroom. That meant only colorful hardcover books were lucky enough to be in the living room, and my well-loved paperbacks were all hidden away. Now I have a mini-library, and I’ve already lent a handful of books to friends.

Forgive the bad lighting, I took this late at night when I thought of the post: 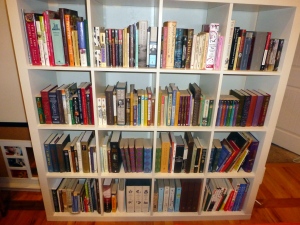 Not pictured: the total destruction of my house. And the top of the bookcase, which has become the final (easily accessible) kids-can’t-reach-this-even-with-the-stepstool place.

The top left cubby is filled with cookbooks, and the rest of the books are arranged alphabetically by author until the bottom left cubby, when I ran out of regular books. Then there are some church manuals, a yearbook, and some cool things.

If you’re curious, here’s a complete listing of the contents of the bookcase, with columns A-D and rows 1-4. (Hey! Late-at-night ideas aren’t necessarily brilliant!)

1A: Hillery family cookbook from the Brian Head reunion
The Pie and Pastry Bible; Bite-Sized Desserts
How to Cook Cookbook
Korean Cooking for Everyone
Party Cakes
The Joy of Cooking
The International Chocolate Cookbook
Food Network Favorites
Spices of the World Cookbook by McCormick
Three & Four Ingredient Cookbook
LDS Hymns

1B: Watership Down
Little Women
The Book of Three; The Black Cauldron; The Castle of Llyr; Taran Wanderer; The High King; The Founding and Other Tales of Prydain
Tuck Everlasting
The Wizard of Oz
Chasing Vermeer
A Witness and a Warning
The Best of Betjeman; Coming Home
A Man for All Seasons
Collected Fictions

1C: Fahrenheit 451
The Secret Garden
Joseph Smith: Rough Stone Rolling
Pathfinder; Ender’s Game (these should be reversed to be correct alphabetically AND chronologically, but Pathfinder and Graceling were exactly the same height, and I wanted to break them up)
Graceling
Alice’s Adventures in Wonderland
Over Sea, Under Stone, Silver on the Tree
Sharing Nature with Children
Walk Two Moons
Jurassic Park and The Lost World
*ON LOAN: The Legend of Zelda and Philosophy
Charlie and the Chocolate Factory; Matilda

1D: The Twits; The Roald Dahl Treasury
The Confucian Transformation of Korea
Because of Winn-Dixie; The Tale of Desperaux
Oliver Twist; Sherlock Holmes
The Count of Monte Cristo
Nickle and Dimed
Magician: Apprentice; Magician: Master; Silverthorn

2A: Krondor the Betrayal
Inkheart; Inkspell
The Perry Mason Casebook
Julie of the Wolves
The Wind in the Willows
The Meaning of Life
The Client
The Other Side of Heaven
The Memoirs of Lady Hyegyong
Princess Academy
The Last Laborer

2B: The Dark Wind; Listening Woman; The Leaphorn and Chee Novels
Standing for Something; Go Forward with Faith
A Prayer for Owen Meany
Lotta Prints
Howl’s Moving Castle
George Shrinks
The Phantom Tollbooth
The Scarlet Slipper Mystery; The Secret of Red Gate Farm
Diary of a Wimpy Kid
Education of a Wandering Man

2C: Still Life with Rice
A Wrinkle in Time; A Wind in the Door; A Ring of Endless Light; Troubling a Star
Ella Enchanted
The Lion, the Witch and the Wardrobe; The Horse and His Boy; The Voyage of the Dawn Treader; The Last Battle; The Great Divorce
The Princess and the Goblin (I am amused that C.S. Lewis ended up right next to George MacDonald)
Adventures of Perrine
Judy Moody
Moccasin Trail
Moby Dick
Anne of Green Gables

3A: The Candy Shop War; Beyonders 1-2
Abhorsen
Mrs. Frisby and the Rats of NIMH
The Scarlet Pimpernel
Nineteen Eighty Four
The Holy Temple; Mine Errand from the Lord
Bridge to Terabithia
Cry, the Beloved Country; Too Late the Phalarope
A Long Way from Chicago

3C: Harry Potter and the Half-Blood Prince; Harry Potter and the Deathly Hallows
The Little Prince
The Very Persistent Gappers of Frip
Print Workshop
The Invention of Hugo Cabret
Hamlet; King Lear; Shakespeare Collection
Five Little Peppers and How They Grew
The Grapes of Wrath
Rosencrantz & Guildenstern Are Dead
The Amulet of Samarkand

P.S. If you’re still reading, I’ll treat you to this factoid: I keep a little tool behind cubby 1B to measure the distance from the front edge of the bookcase to the edge of the books, so they all line up nicely. Every so often (because June likes to attack the books) I realign everything. Obsessive? Maybe slightly. But it keeps the bookcase looking nice, even if it’s only filled with books!