The Romgi and I were able to go to the Saturday evening performance of The Sleeping Beauty. As a whole, it was amazing. Let me first tell you some things I disliked and then I’ll rave about how absolutely phenomenal it was. 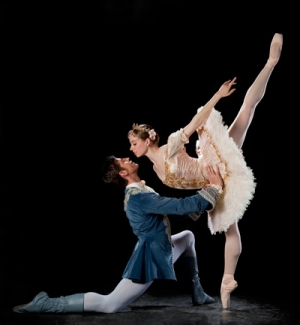 I was not a fan of the costumes. Don’t get me wrong, I like tutus, but they can be overdone. And here they were. Every major character was in a nearly-identical tutu, covered with sparkles. The five fairies were in distinct colors, but then a lot of other characters, including Aurora, had neutral-colored costumes and it didn’t seem like there was enough emphasis on her as The Main Character.

The evil fairy, Carabosse, uses impressive magic to disappear from stage with a flash of light and a puff of smoke. Unfortunately, the flash of light was blinding. It was so bright that it hurt my eyes and I couldn’t focus on the other dancers afterward. The fun effect was ruined by the violence it did to the audience.

My biggest complaint, and the Romgi agrees with me, was that the producer wanted to “re-conceive” and “re-envision” the ballet to make it relevant for modern audiences. This seemed to mean “Give them something to laugh about.” Personally, I didn’t go to the ballet to be amused. The cutesy slapstick attitude of the fairy tale characters in Act III felt inappropriate.

What a breathtaking evening! I enjoyed the performance so much. The dancers were superb – they astounded me with their grace, their strength, their talent. It was beautiful. And it was inspiring. I felt that this was an example of the tremendous heights to which humanity can rise. This really was a profound experience for me.

Also, the sweet old lady behind me remarked that I must be a ballerina because I look just like one. Oh, flattery.

I'll take a separate picture of the amazing GOLD SHOES I wore.