The cool thing about this giveaway was that I personally know almost everyone who entered, so I can give out copies of the anthology as Christmas gifts and you won’t feel bad about not being a winner here.

That being said, Valory and Tony are the winners, and I’ll be emailing both of you to get your mailing address.

One more plug for Spark: A Creative Anthology – I strongly recommend getting yourself Volumes I and II, even if you just won (or will be receiving for Christmas!) a copy of Volume III. And if you’re a writer, keep an eye out for their next contest. You can submit your work at any time, but contests have awesome prizes like money. I love money. Plus, right now Spark is working on paying pro rates to all accepted writers. You love money too, don’t you?

In honor of happy holidays and such, I’m giving away TWO copies of Spark: A Creative Anthology, Volume III. It is, of course, the volume in which my story about Christian appears. But don’t enter for that alone – the volume is also full of well-written stories and poems. You’ll be glad to get a copy. 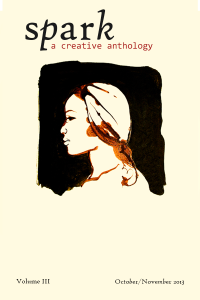 It is lusciously creamy, both in color and texture. You want it.

Might I suggest that, in the event that you aren’t a winner here, you head on over to purchase it and/or either of the first two volumes?

Alright, so. The giveaway.

To enter, leave a comment on this post telling me how you let people know that they’re meaningful to you. It could be something simple like saying “I love you” often or buying their favorite snack as a surprise (thank you, Jarom, for Slim Jims), or something big like . . . well, you’ll have to come up with it.

You can enter a second time by emailing a link to my blog to someone who hasn’t read it yet. Leave a comment telling me that you did so. On your honor, people.

You can enter a third time by buying Volume I or Volume II – a print copy or the ebook – and leaving a comment telling me that you did so. Please also email me a copy of your purchase confirmation.

Disclaimer: my siblings, as well as Jarom’s immediate family, are not qualified to enter. We have a copy to give you!

You have until midnight MST on Monday, December 16 to enter. I’ll choose two winners at random and announce them here on the blog on December 17. I will also email the winners, so please make sure you leave a valid email address with your entry (it won’t be displayed publicly).