My First and Last Day in Customer Service

I work, or rather worked, at a security system company. We don’t take calls from customers who have had a break-in, or dispatch the police to save a person’s life. In my department, data entry, we simply take calls from the sales representatives and from the installation techs. We just make sure that all the signals are coming from the various devices installed around the house, and run credit checks on people to make sure that they can afford the monthly bill.

A few weeks ago, near the beginning of October, our company finally closed down the last of the sales offices. This meant that there was even less for the morning shift (6-10 AM) to do. Personally, even during our busiest days in the summer, I never got many calls before 8 o’clock, and since school started, I have only been getting about one call every day before my shift ends. I barely noticed when they closed the offices, because honestly, I wasn’t that busy to begin with.

Well, the higher-ups thought that it was unacceptable to have so many people working data entry that early in the morning when all of the sales offices were closed. They began to think up new jobs for us. My manager emailed everybody in data entry a list of about 50 existing customers and their phone numbers. She told us to call these people, and ask them for the names and numbers of people they know that might enjoy the system.

There are two things that are horribly wrong with this idea. First, I started work at 6 AM. Even if I spend all my time calling people on the east coast, I would calling them at 8 AM eastern time. That is early. If somebody called you at 8 AM and tried to get a referral from you, would you be happy? I sure wouldn’t be!

The other thing that you need to realize is that these people have no idea that they will be contacted for referrals. On the contract there is no check box that says, “it is ok to contact me for business purposes” or anything like that. They had no idea, when they signed up for a security system, that we would be calling them at ridiculously early times so that we can con their friends into the same junky system!

So, mostly due to these two reasons, everybody on the morning shift for data entry decided to pretend like we never got the email. We decided that if it came down to it, we would rather quit than continue working for a company that would go to such great lengths to annoy its customers. Another reason for our defiance was that in our mandatory script we were basically forced to lie to the customer. We tell them that if they refer their friends, then their friends will be able to receive the exact same system that they did. However, this is not true. If the person that we got the referral from got a lot of free extras with their system, then it is very doubtful that their friend will get a system half as good. The only system available for our referrals would be the basic system, which is very limited, and very expensive.

That same day, however, I found out that I would be moved over to customer service, along with a few other people from data entry. Customer service deals with people that realize they have a system that is basically worthless, and want to cancel. These people did not read their contract, and failed to see that unless they cancel their service within three days, they are unable to cancel their contract. Well, let me rephrase that, they can cancel, but they have to buy their contract for 80% of their remaining payments. At $45 a month for 3 years, that quickly adds up.

I worked there one day, and then quit. I kept that job because it allowed me to study and do homework. The customer service folk talk to a lot of people. A lot of people. I spent the day listening people angry that they cannot cancel their contracts. Realizing that I would not be able to study, and if I was not studying, I would rather be sleeping, I quit.

I did get, however, some funny stories from my one day in customer service.

The Invention of Hugo Cabret

A Novel in Words and Pictures
by Brian Selznick

I heard about this book from the Provo Library’s list of recommended young adult novels. A few weeks ago, the Romgi and I were in the BYU bookstore and saw that it was on sale; I’ve really been wanting a book to read, so the Romgi was nice enough to coerce me into buying it. School has been busy (midterms, yuck) but today I finally got a chance to sit down and read it.

And? I think it’s a great book. The story is not superbly written, and definitely doesn’t compare with my other favorites (Harry Potter, Phantom Tollbooth, Inkspell), but the way everything was presented was fantastic. It really is a novel in words and pictures: Selznick is a great artist and a lot of the book is his drawings. They serve to further the plot, not just illustrate what has already been said. Altogether the book is about 500 pages, but I read it in a little over an hour.

I definitely think you should check it out sometime, because it’s a really unique approach to storytelling.

a hot chocolate kind of day 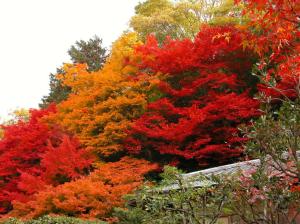 There is something about fall that makes me long for something. Maybe it is because I have spent 3 of my last 4 falls in Korea… Whenever I am walking around and I look at the colors of the trees, and feel the coolness of the air, in short, those days when it is especially autumn-ish, it makes me feel really nostalgic.

Now I now what you are thinking, “hey, who is this kid, he’s like not even 25 and he is talking about nostalgia??” But I think that you can feel nostalgic at almost any age. How you feel that nostalgia might differ over time, but I believe that even a 7 year old kid can be nostalgic for the days when he didn’t have school.

Back to nostalgia, it seems that when I look at the myriad of colored leaves that autumn has to offer, it reminds me a lot of my freshman year of college. Back in California, I don’t especially remember trees changing colors, and all the leaves falling off the trees. I think that trees feel this “fall” nonsense is superfluous when the coldest they are going to be is about 60 degrees. So when I came to Utah in fall 2002 and the leaves started changing colors a few weeks later, I really began to notice.

In particular, there is this big tree with broad leaves that I passed every day on my walk from the dorms to campus and back. When I noticed that the colors were changing on the tree, I thought it would be fun to get a leaf for each color. So about once a week, I would pick a leaf from the tree. By the first snow I had yellowish green, yellow, orange, red and even brown leaves gathered in my dorm room.

So now, to this day, when I see the leaves beginning to change color, I am reminded of this. And for some reason this makes me want to have hot chocolate. Really good hot chocolate. In fact, I think I can hear the Ghirardelli hazelnut hot chocolate calling my name right now…